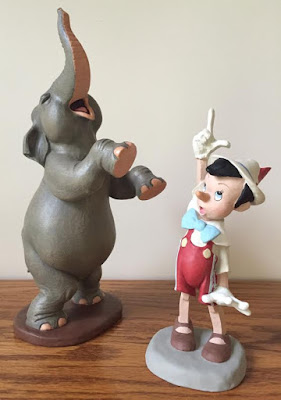 Yesterday I received my first maquettes from the new collection, the Walt Disney Archives Collection by Enesco LLC ... The Elephant from Fantasia ('The Dance of the Hours' sequence) and Pinocchio from Pinocchio.

The Fantasia Elephant maquette reproduced for this edition was on display at the end of 1966 on the north windowsill of Walt Disney's formal office on the Burbank Studios lot.

I will do a review in a separate entry for each sculpture but wanted to share some photos I took of the maquettes with releases from the Walt Disney Classics Collection.

Pictured below is the Elephant Maquette with Hyacinth Hippo and Ben Ali Gator from The Dance of the Hours sequence.  I thought the Elephant worked in very well with both these sculptures. Unfortunately, I don't own Madamoiselle Upanova to include her in the grouping as well. 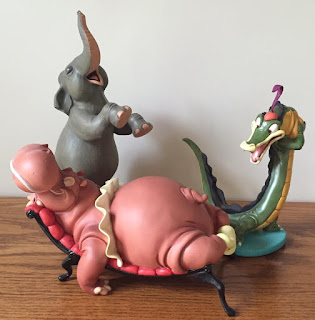 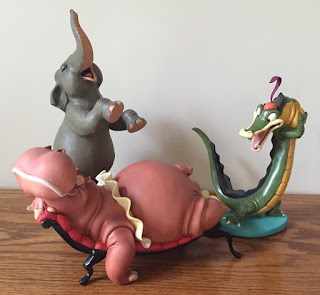 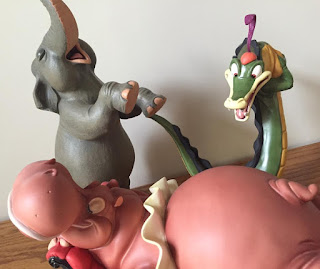 Below is the Pinocchio Maquette with the Walt Disney Classics Collection first release of Pinocchio ("Good-Bye Father"). 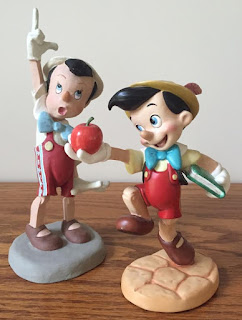 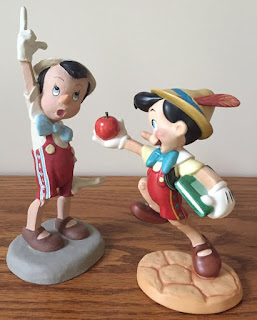 Yay! You're back! I thought the end of WDCC meant we'd never see a high quality Disney collectible again. A couple of things:

1. I wonder if this line has been in the makings for a while. It seems a lot of the problems with WDCC were corrected with this line. The price points... The medium used (resin as opposed to porcelain). The coolest thing though for me is how high quality these pieces look being in the medium they are in. I wonder if this was a quality they just recently have been able to perfect. These don't look cheap! And other Enesco product lines do like the princess / mask line.

2. I love that this line has an artistic presence about them. I can see me displaying these throughout the house with my art as opposed to them all being together in a curio... Similar to how Disney himself displayed some in his office etc.

3. Love that this line presents so many possibilities. Vintage vs current looks... Theme park maquettes... And hopefully Pixar because Pixar makes some fantastic maquettes.

Anywho! I am very excited... Plus I can actually start out as a charter collector and not have to go back through a catalog of pieces to "catch up"! Here's hoping these are successful and continue with some great additions! Thanks for continuing the blog!

Thanks Justin! I really like how this line is an extension of sorts down to the Walt Disney Classics Collection, from the striped boxes to each sculpture containing a certificate plus a story card. This line has the feel of a collectible like Classics vs. a giftware line.

I don't know how long this line was in the planning stages. I became aware of it, just a few days prior to the start of Expo.

I have no problem the sculptures are in resin vs. porcelain, knowing so much more you can do in resin (capturing detail). Very curious to see where this line will go as far as what we see in future releases. I like that pieces can compliment the WDCC (as the Elephant did with Ben and Hyacinth).

I too hope the line is successful and gives us an opportunity to possibly get characters they didn't do in the WDCC such as the Coachman from Pinocchio plus the newer films they only began to touch on in Classics.

You're more than welcome. I always enjoyed writing on the blog, taking photos, so was like coming home with this line!

These are so cool, all of them in your blog. You seem like a big Disney fan and I came across some awesome Disney riddles I wanted to share with you here: Disney Riddles