Jiminy Cricket Has Sold Out!! 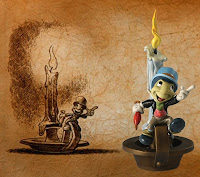 Jiminy Cricket ( "Spirit of the Season"), the Fall 2009 Premiere Event Sculpture has SOLD OUT!!

Jiminy from Mickey's Christmas Carol, has sold out two months prior to the event! Awesome News!! Many will recall a similar situation last fall with the Tinker Bell event sculpture ("Blithe Spirit"), with the sculpture selling out prior to the event. As one who had to frantically search for Tinker Bell, I made sure to have Jiminy pre-ordered this year!
Sculpted by Ruben Procopio, Jiminy is a Numbered Limited Edition (NLE) of 2,000. He will be available through all participating Walt Disney Classics Collection dealers and the Walt Disney Theme Parks, September 25-27, 2009. 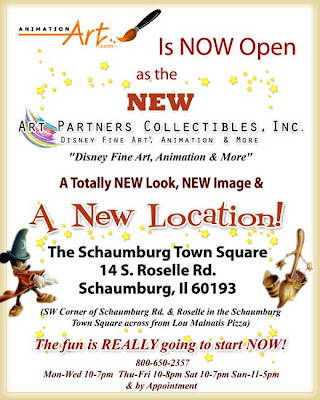 Join them this Saturday, July 25th as Trevor Carlton returns for the Grand Re-Opening where he will paint LIVE under the Tent at 1:30pm!
Posted by DC Pop Fanatic at 6:00 AM 0 comments 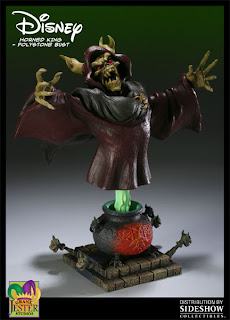 Sideshow Collectibles has updated their website with the latest release in the Disney Bust Series from Grand Jester Studios and the creators of the Walt Disney Classics Collection for Fourth Quarter 2009 .. Tremble, mortals, at the terrible glory and fearsome visage of the Horned King!

Erupting from the stygian depths of the Black Cauldron itself, this ghastly ghoul has set his baleful sights upon all who dwell within the fabled kingdom of Prydain. The ultimate embodiment of decay and corruption, this character authentic, polystone mini-bust is designed and sculpted by veteran Disney animator and sculptor Rubén Procopio. 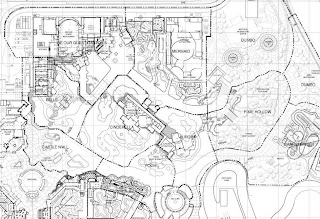 The Internet was a buzz yesterday with plans that leaked of proposed changes for Fantasyland at WALT DISNEY WORLD® RESORT.

It appears attractions such as Mickey's PhilarMagic, Snow White's Scary Adventures, It's a Small World, The Many Adventures of Winnie the Pooh and Mad Tea Party will stay in their current locations but Dumbo the Flying Elephant could be relocated.

You will notice the numerous character meet-n-greets, a new 'Be Our Guest' table service restaurant and 'Gaston's Tavern' and dueling Dumbo rides with an interactive queue sandwiched in-between. Based on these plans, it looks like Toon Town will be no more.

While there is absolutely no reason to think the finished product (assuming the project is green-lit officially) will look anything like these plans, it is interesting to ponder the possibilities.

Thanks Greg for sharing this with us! 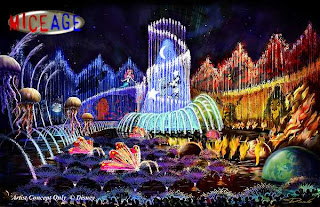 ANAHEIM, Calif. (July 16, 2009) – Elaborate preparation is underway for “World of Color,” the spectacular nighttime water show that will astound guests with its magnitude and creativity when it debuts in spring 2010 as the next major milestone in the expansion of Disney’s California Adventure park. Surpassing all Disney water productions, “World of Color” will bring Disney animation to life with powerful fountains that become stars of the show as they create the world’s largest projected water screen.

For months now, guests at Disney’s California Adventure have been peering into the lagoon near Paradise Pier as Walt Disney Imagineering and Creative Entertainment have installed the massive infrastructure and innovative technology that will create the stage for this extraordinary combination of music, animation and stunning water effects. Teams of Disney workers have built nearly an acre of superstructure to support the complex “World of Color” production.

“World of Color” will combine hundreds of magnificent fountains, dazzling colors and an all-new kaleidoscope of audio and visual effects to take water-infused entertainment to a new level of artistry. The production will flood the senses, taking audiences on an imaginative journey into the colorful worlds of animated Disney classics such as “Alice in Wonderland,” “The Lion King” and “Pocahontas,” along with Disney•Pixar films “Toy Story,” “WALL-E” and many more.

Disney’s newest production features an unprecedented infrastructure of water effects, larger-than-life projections, lasers, fire, fog, surround sound and stunning images. This technical wizardry, combined with classic Disney film sequences, will create a breathtaking emotional experience for guests as jaw-dropping effects sweep across the lagoon, soar into the sky and rush toward the audience.

Some of the technical magic behind ‘World of Color’ includes:

D23 Expo: The Ultimate Convention for All Things Disney!

Animation, movies, music, television, Theme Parks, theater, and more -- the magic of Walt Disney's incredible vision has touched the lives of millions in so many ways. Each with special memories, fans are always eager to see what's next from the House of Mouse. Even after 81 years of sparking imaginations worldwide, the most ardent Disney enthusiast couldn't have predicted the Company's latest stroke of genius. From September 10 through 13, the Anaheim Convention Center will host every Disney experience conceivable as the first-ever D23 Expo thrills the city of Anaheim, California, right down to its last glimmer of pixie dust.

Steven Clark, head of D23, shares the exciting details. "The Walt Disney Company has never done anything like this before. It's the biggest, truly most impressive gathering of all things Disney. Every part of the Company will come together to celebrate our rich history and legacy on an enormously grand scale."

Starting in the 5,000-seat arena, visitors can hear keynote speakers from every area of The Walt Disney Company. "President and CEO Bob Iger kicks off Thursday's talks at 11 a.m. with a Company-wide overview ... and a few surprises along the way," says Steven. Other department heads will also speak during the four-day extravaganza, along with star-studded presentations, live performances, and behind-the-scenes exclusives. Steven promises Guests are in for the biggest "wow" possible and reveals that the lineup will be spectacular, with appearances from some of TV's hottest stars. "Though everyone's sworn to secrecy, I can tell you one thing -- it's going to be awesome!"

Next up is the arena event Steven anticipates most. "I'm thrilled we were able to bring the Disney Legends Ceremony to the expo ... for the first time ever it won't be held on Disney property. It's exciting that Cast Members and fans will be able to participate in this 22-year-old, time-honored Disney tradition." With the ceremony scheduled for 12 p.m. on Thursday, this year's honorees -- selected from live-action films, animation, Imagineering, and Theme Parks -- will be announced later this summer. Past legends are always invited and Steven confirms it will be well attended by Disney celebrities.

Over in Halls A, B, and C, individual pavilions will display each business unit's latest and greatest in true Disney style. From the models and concept art for Parks and Resorts to Radio Disney and the ESPN Lounge, there's something for everyone in the family as well as hardcore fans. Fashion shows, book signings, activities, pin trading, and the D23 Expo Dream Store are just the beginning.

Check out the Donald Duck Art Competition at the Fan Art Gallery, where D23 Members illustrate their take on the feisty fowl. "This is the first time the Company's given fans the opportunity to interpret a Disney Character, let alone become the official portrait artist. The winner will receive a 'Duckster' award, created by Walt himself. Not many are handed out and there are only a few left in the vault. It's highly coveted," Steven points out. Entries for the D23 2009 Fan Art Contest -- showcasing Members' art of the Fab Five -- will also be displayed.

The Collector's Forum is where fans can showcase, buy, sell, or trade their own personal collections. "There have been similar Disneyana events at other conventions and unofficial clubs. They're incredibly popular and allow fans to meet each other," explains Steven.

Saturday night's D23 Expo Auction will include one highly desirable lot sure to cause a stir amongst collectors. "Even though there are about 35 lots of extraordinary collectibles and historic memorabilia, lot 23 will be the one fans go crazy over since it represents the year Walt formed the company ... it contains an extra-special surprise."

Venture upstairs for another special event Steven really looks forward to. "I'm excited about the 'Treasures of the Walt Disney Archives' exhibit. Over the years, the Disney Archives has loaned props, costumes, memorabilia, and historic assets to various museums. For the first time ever, the Archives will host its own display of rare and iconic items from classic films as well as contemporary shows ... these pieces are the 'crown jewels of Disney' and most have never been seen prior to the expo. Having the chance to enjoy Disney history this way is almost an event within an event," Steven continues.

Guests can also preview the auction or catch a sneak peek of the new fall lineup at the ABC theater. Stage 23 will feature presentations from Disney authors, the Archives team, Imagineers, and more. Steven describes the program from Walt Disney Theatrical Productions. "We'll have a choir and music from 'The Lion King,' with Tom Schumacher and director Roger Allers giving the genesis of how they created the music. It's going to be an amazing musical event."

Moving upward, Walt Disney Studios occupies the entire third floor with a state-of-the-art digital cinema and galleries showcasing concept art, models, and production elements from various movies. "Filmmakers and talent will be on hand for a behind-the-scenes look at upcoming films like 'The Princess and the Frog,' 'Disney's A Christmas Carol,' Tim Burton's 'Alice in Wonderland,' 'The Sorcerer's Apprentice,' 'Prince of Persia: Sands of Time,' 'Toy Story 3,' and a special look at 'Rapunzel,'" Steven says.

"We'll have advanced screenings of 'Tinker Bell and The Lost Treasure' and the Diamond Edition of 'Snow White' with a guest panel. Our '50 and Fabulous Film Festival' features nightly screenings of Disney classics turning 50, including 'Darby O'Gill and The Little People,' 'The Shaggy Dog,' and 'Sleeping Beauty.' It's going to be an annual tradition."

With so much to see, where does one start? Steven replies, "People can find event info online to plan their must-sees ahead of time. We've taken over hundreds of thousands of square feet for four full days of exciting Disney entertainment." 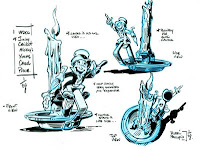 Ruben Procopio has recently updated his blog, Masked Avenger Studios with concept sketches of his upcoming releases from Mickey's Christmas Carol .. Jiminy Cricket and Scrooge and Marley plus images of both sculptures in clay form.

Jiminy Cricket (a Numbered Limited Edition (NLE) of 2,000), is the Fall Spirit of the Season Premiere Event sculpture. He will be available through all participating Walt Disney Classics Collection dealers and the Walt Disney Theme Parks, September 25-27, 2009. 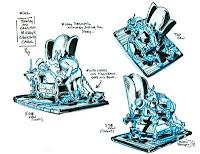 The series made it's debut in July 2008 with the Open Edition releases of Mickey Mouse (as Bob Cratchit), Donald Duck (as Nephew Fred) and Scrooge McDuck (as Ebenezer Scrooge), sculpted by Ruben Procopio. This first scene release was an instant hit with collectors! Ebenezer Scrooge was just honored with retirement on June 20th!
Posted by DC Pop Fanatic at 2:30 PM 0 comments 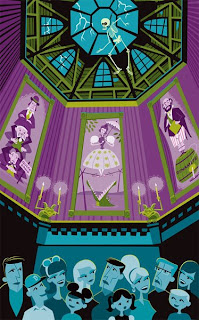 Our recent Would you be interested in seeing a 'Haunted Mansion Series' Done Poll has ended. The results are as follows:

Rumors are afloat there is a series in place, the Haunted Mansion Organist being the 1st release in the series. Castmembers (as well as other message boards) are pretty sure that there will be a series and possibly 5-6 releases. I have been unable to get a confirmation there is an actual series in place.

In another entry, we've been discussing potential releases we would like to see done if a series materializes, which I will recap in another poll later this week.

I will leave the results up for the Would you be interested in seeing a 'Haunted Mansion Series' Done Poll for a few days for anyone who wants to see/compare the final results. As with previous polls, Blogger results never add exactly to 100%, so the accountant in me recalculated the results based on the number of people who voted in each category to the total :)

Thanks to all who participated!

Image used in entry is entitled, "A Dismaying Observation" done by Shag for the upcoming 40th Anniversary of the Haunted Mansion. 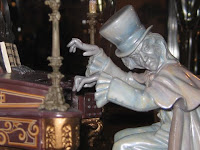 Thanks to all who participated!
Posted by DC Pop Fanatic at 2:00 PM 3 comments

Sometimes a temporary structure lasts a little too long...