It's time for our annual trip to WDW! After a grueling week at work, glad to get away for a few days of fun and relaxation with family and friends at one of our favorite destinations.

Amanda's roommate Rachel from college will be joining us and we'll be meeting up with resident Floridian Terry and our BFF's from NY, Bob & Toni. Should be a week of good times and a LOT of laughs!

Bags are packed, car is loaded and we're out the door! Hopefully we will bring some of the nice, warm weather we've been having to the very wet Orlando area!

Looking forward to Characters in Flight, located in Downtown Disney, checking out the new DVC resorts at Kadani Village, Bay Lake Towers and the Treehouse Villas plus trying some new restaurants!

Hope everyone has a Safe & Happy Memorial Day Weekend!!
Posted by DC Pop Fanatic at 4:00 AM 0 comments 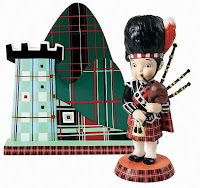 Honored today (05-22-09) as a dry retirement is Scotland from Disney's It's a Small World Series. The Highland Laddie and his Castle accessory item made their WDCC debut in May, 2007 as an Open Edition release.

In addition to today's retirement, the following sculptures have sold out and/or have been suspended.

Peg: Dog Pound Diva (from Lady and the Tramp)

Special Note Regarding Suspensions: When an Item is Suspended it is out of stock and there are no plans to re-order for at least a year. However, it could be decided to change the status from Suspended to Retired (Dry Retirement) at some point.

If interested in a suspended item, you may want to check with retailers regarding availability as there is no guarantee that the item could be put back into production and its status changed back to active status. 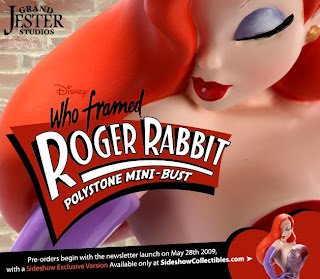 Sideshow Collectibles has posted on their website a preview of Jessica Rabbit, an upcoming release in the Disney Bust Series by Grand Jester Studios.
Their website says that pre-orders will begin with the newsletter launch on May 28, 2009, with a Sideshow Exclusive Version available only at SideshowCollectibles.com.
These dynamic busts are designed to capture all the grandeur and power of The Walt Disney Studios’ noblest heroes, loveliest heroines, and vilest villains. Brought to life by Disney and Grand Jester Studios under the creative direction of animator and sculptor Rubén Procopio, these limited edition polystone busts offer collectors and Disney fans alike the opportunity to bring home and display their favorite animated and live-action characters in this detailed collectible format.
Thanks William for this breaking news!
Posted by DC Pop Fanatic at 5:30 AM 3 comments

Tinker Bell & Stitch in Next Wave of Polystone Busts from Grand Jester Studios!

Sideshow Collectibles has updated their website with two more releases in the Disney Bust Series from Grand Jester Studios and the creators of the Walt Disney Classics Collection for Third Quarter 2009 .. Tinker Bell and Stitch!
Tinker Bell (Peter Pan) and Stitch (Lilo and Stitch) join previously released polystone busts -- King Triton and Ursula from The Little Mermaid, Peter Pan and Captain Hook from Peter Pan, Snow White and Hag from Snow White and the Seven Dwarfs and the Rocketeer from The Rocketeer.

These outstanding collectible busts are high-quality, detailed representations of some of the world's most beloved Disney characters, perfect for any fan to display.

Whether she's plotting against arch-rival Wendy for Peter's affections or spying on the dastardly Captain Hook, one look says it all: Don't mess with Tinker Bell! Portraying the peeved pixie in a particularly petulant pose, this character authentic, porcelain mini-bust of Never Land's favorite scene-stealer is designed and sculpted by veteran Disney animator Ruben Procopio. Standing 7 inches tall, Tinker Bell comes painted and ready to display alone or with the Captain Hook Bust and Peter Pan Bust (offered separately).

From Disney's Lilo & Stitch, there's a reason Experiment 626 (a.k.a. Stitch) tops the galaxy's Most Wanted list. Wielding four sizzling ray-guns and a gleefully maniacal smile, this trigger-happy alien is genetically designed to wreak as much havoc and destruction as inhumanly possible. Stitch's incorrigible attitude and bad-boy charm are on full display in this character authentic, polystone mini-bust designed and sculpted by Disney animator Ruben Procopio. Standing 7" tall, Stitch comes painted and ready to display.

Special Thanks to Geoffrey for posting this information in another blog entry!
Posted by DC Pop Fanatic at 4:00 PM 12 comments 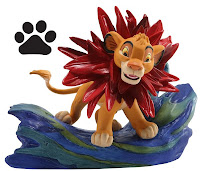 The 2009 Production Mark has been sighted! The Paw Print production mark was sighted on Simba ("Little King, Big Roar"), the 2009 Spring Event Sculpture which made it's debut April 17-20, 2009.
This year's production mark honors Walt Disney's animated classic One Hundred and One Dalmatians and the symbol is a paw print (pictured at left).

Thanks Carl/Gurgi for this breaking news! Very appropriate the first sculpt to bear this year's production mark would be Simba :)
Posted by DC Pop Fanatic at 7:30 AM 0 comments