There are not many Walt Disney Classics Collection releases that would qualify as Thanksgiving themed releases as compared to Halloween and Christmas.  Each year, one piece that I consider seasonal is Pocahontas with Meeko and Flit from Pocahontas. Unfortunately am unable to display year-round, so always look forward to this time of year to incorporate into our Thanksgiving displays.

Animators working on the film regarded Pocahontas as being one of the hardest films ever produced by the studio. The complex color schemes, angular shapes and facial expressions meant that the film was in production for 5 years. The hard work paid off, however. Pocahontas herself is now frequently cited as being one of the most beautifully and realistically animated characters in the Disney canon, her fluid movements mainly being attributed to rotoscoping.
The film's premiere was a huge event in Central Park. With over 100,000 people attending, it holds the record for the largest movie premiere. The film received critical praise for both the animation and art direction. The film utilizes very different colors than in previous Disney films, which resulted in a beautiful color palette from the Art Department at Disney. Colors that symbolized different emotions, such as red for anger/hate, blue for love and pink and purple for nature were purposely used. The animators also decided to be unconventional when they decided to use the "mother spirit in the leaves" motif, which consisted of leaves floating in the wind during significant scenes in the movie that represented passion and beauty.

Originally the animal characters had dialogue, just like in previous Disney features. This was dropped when the filmmakers pushed for a more realistic treatment of the story. One character, a turkey named Redfeather, was dropped entirely. John Candy had provided a large amount of voice work for this character who was to be Pocahontas's sidekick. However after Candy's death in 1994, the concept was scrapped.

In the very first draft of the script the character of "Grandmother Willow" was written as a male character who was the spirit of the river, the character was named "Old Man River". The song "Just Around the Riverbend" was written for this character to be sung. Gregory Peck was offered the role and as much as it pained him to do it, turned down the role because he felt the title character needed a motherly figure to turn to for advice. Soon the filmmakers agreed with him and the character was changed.

The Walt Disney Classics Collection released "Listen With Your Heart" (a non-member commission release) sculpted by Gwen Dutcher in 1996 following the film's Fall 1995 release.  The sculpture featured Pocahontas with her trusted friends, Meeko and Flit.  Prototypes shipped to retailers, prior to the sculpture's release had a thinner base. It was the second release in the Tribute Series. The redemption period was March 01, 1996 thru May 31, 1996. 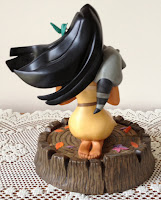 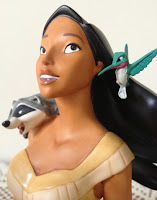 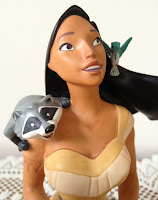 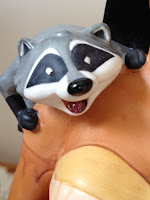 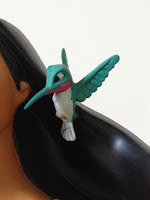