That disturbance in the Force you sense is the arrival of irascible Donald Duck in the fearsome guise of the infamous Darth Maul from the Star Wars saga.  Wielding the sinister Sith Lord’s double-bladed lightsaber and outfitted in black, Donald strikes fear in all who behold his visage and piercing gaze.   All Jedi should prepare for Darth Maul’s relentless pursuit of his quarry!

Give in to the Dark Side, make Darth Maul Donald part of your Star Wars and WDCC collection!
Donald Duck as Darth Maul will be released during Star Wars™ Weekends.  Sculpture release date is April 30, 2012.  Donald 'Darth Maul' is an Open Edition with a SRP of $ 150.00 US.  Donald is the 2nd release in the Star Wars Series joining Jedi Mickey, an Open Edition release, released in September 2010.

NOTE:   A limited number of WDCC Darth Maul Donald sculptures will be made available at Disneyland® Resort following the WALT DISNEY WORLD® Resort premiere, subject to availability.
Posted by DC Pop Fanatic at 12:30 AM 3 comments

Stitch has played many roles in his brief but tumultuous lifespan:  Experiment 626, intergalactic criminal fugitive, household pet...  But his greatest challenge yet is taking on the mantle of the Star Wars saga’s legendary Yoda.  Draped in the wizened Jedi Master’s robes and armed with a diminutive lightsaber, Stitch exudes the indomitable spirit and focused concentration of a true wielder of the Force.  Judge him by his size, do you?

This character-authentic, polystone mini-bust designed and art directed by Disney veteran animator Ruben Procopio and sculpted by Bruce Lau stands 8 ¼” high x 3 ¾” wide x 4” deep and is hand-painted and ready to display.  The base design takes inspiration from architectural elements and color palette from the Grand Convocation Chamber of the Senate Building where Jedi Grand Master Yoda duels the Dark Lord of the Sith, Darth Sidious.

When 900 years you reach, look as good, you will not.  Make this very first Star Wars Disney limited polystone bust part of your Star Wars and Disney collection!

NOTE:   A limited number of Stitch as Yoda polystone busts will be made available at Disneyland® Resort following the WALT DISNEY WORLD® Resort premiere, subject to availability.
Posted by DC Pop Fanatic at 12:00 AM 0 comments

BURBANK, Calif. – April 19, 2012 – Marvel’s The Avengers is so big, Disney twenty-three magazine needs not one, not two, but three eye-popping collectible covers to do it justice … and that’s what D23: The Official Disney Fan Club has planned for the summer issue, which is available nationwide on May 1.

Coinciding with the worldwide theatrical release of Marvel’s The Avengers, the summer issue of Disney twenty-three features a 10-page story on the creation of the biggest superhero film ever produced. Author and Disney Imagineer Jason Surrell spoke with the film’s acclaimed writer-director Joss Whedon, as well as stars Robert Downey Jr., Chris Evans, Scarlett Johansson, Tom Hiddleston and Clark Gregg, and producer Kevin Feige to get the behind-the-scenes details on the explosive film, from the complexities of bringing many of the world’s most famous heroes together to nights out dancing in downtown Albuquerque.

Each of the magazine’s three front and back covers feature different characters:
“Marvel’s The Avengers is a groundbreaking film, so we had to do something equally exceptional with our flagship magazine that would thrill both Disney and Marvel fans alike,” says Steven Clark, head of D23: The Official Disney Fan Club. Along with the new issue, D23 Gold Members will receive a special member-only gift: one of seven collectible patches featuring the insignias of each Avenger.

Marvel’s The Avengers is only part of what’s in store in the summer issue of Disney twenty-three, which explores the most exciting new developments throughout Disney – while offering new insight into fan favorites. Among the articles in the summer issue:

The summer issue of Disney twenty-three also offers an exclusive interview with Newsies film director Kenny Ortega; a celebration of the history of the Disney Store, which first opened its doors 25 years ago; photos from the latest D23 events across the country – and rarely seen photos from the Walt Disney Archives in the magazine’s popular PHOTOfiles section.
Posted by DC Pop Fanatic at 1:00 PM 1 comments 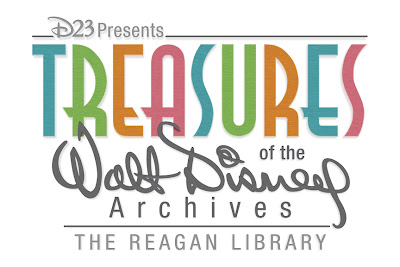 Presented by D23: The Official Disney Fan Club and The Ronald Reagan Presidential Foundation and Library, D23 PRESENTS TREASURES OF THE WALT DISNEY ARCHIVES is the largest exhibition ever curated by the Walt Disney Archives, at 12,000 square feet. From Oswald the Lucky Rabbit and Mickey Mouse to Captain Jack Sparrow and Captain America, the exhibition features more than 500 artifacts, at least half of which have never been seen by the public— including models, props, costumes, set pieces, and artwork from throughout Disney history.

“Ronald Reagan and Walt Disney were longtime friends, two optimists who shared an unwavering belief in the essential goodness of the American way of life,” said Bob Iger, chairman and CEO, The Walt Disney Company. “We’re proud to partner with the Reagan Library and the National Archives to showcase Disney’s rich entertainment legacy. This extraordinary exhibit will offer visitors an unprecedented look into Disney’s history and celebrate the connection between these two American originals.”

Among the extraordinary items to be featured are:
·        The original script, written by Walt Disney, for Mickey Mouse’s film debut in 1928’s Steamboat Willie;
·        A faithful recreation of Walt’s formal office from the Walt Disney Studios in Burbank, Calif., including original furnishings and many of his personal items;
·        Hand-drawn artwork and hand-sculpted models used in the production of some of the most beloved Disney animated film classics ever created, including Snow White and the Seven Dwarfs, Pinocchio, Fantasia, Bambi, and Sleeping Beauty;
·        Props from classic Disney live-action productions, including Mary Poppins, 20,000 Leagues Under the Sea, The Absent-Minded Professor, The Shaggy Dog, Babes in Toyland, Bedknobs and Broomsticks and more;
·        Breathtaking props, costumes, and set pieces from recent Disney classics, including the Pirates of the Caribbean films, Tim Burton’s Alice in Wonderland, TRON: Legacy, National Treasure and Captain America;
·        Intricately sculptured busts of all 44 U.S. Presidents that were created for Audio-Animatronics® figures seen in the The Hall of Presidents attraction at the Magic Kingdom at Walt Disney World Resort;
·        A salute to Disneyland and the Magic Kingdom at Walt Disney World, showcasing theme park artwork, Audio-Animatronics® characters, memorabilia and authentic attraction vehicles

The exhibition also pays tribute to the long personal friendship and professional collaboration between Walt Disney and Ronald Reagan, which began many years before President Reagan’s political career.

On July 17, 1955, Ronald Reagan was one of the co-hosts of ABC Network’s live coverage of the opening of Disneyland, and as governor of California, he frequently visited Disney’s first theme park. After leaving the Oval Office, one of his first public events was a return to Disneyland, where he officiated at the park’s January 1990 35th-anniversary celebration, proclaiming it “one of America’s national treasures.”

“Walt Disney and Ronald Reagan shared a passion for America, a belief in the human spirit, and an innate optimism that, in both men, galvanized the public,” said John Heubusch, executive director of the Ronald Reagan Presidential Foundation. “President Reagan was a great admirer of Walt Disney, and we are tremendously proud to host this wonderful exhibition of Disney treasures, and to honor the bond between Walt and President Reagan.”

For exhibit hours and additional information, visit the Ronald Reagan Presidential Library & Museum online at www.reaganlibrary.com, or www.Disney.com/D23. Admission to the exhibition is included with the purchase of admission to the Ronald Reagan Presidential Library & Museum.  Through April 2013, when the exhibition is scheduled to end, members of D23: The Official Disney Fan Club also save $2 on every adult admission.


“At 12,000 square feet, this is the largest special exhibit the Reagan Library has ever put on,” said Duke Blackwood, director of the Ronald Reagan Presidential Library. “It is a testament to the relationship between Walt Disney and our nation’s presidents, as well as the story of Disney, itself. The Reagan Library and National Archives are honored to host this extraordinary exhibit.”
The Ronald Reagan Library & Museum is located in Simi Valley, Calif., about 60 minutes north of downtown Los Angeles and approximately two hours north of the Disneyland Resort in Anaheim.
Posted by DC Pop Fanatic at 12:05 PM 0 comments

Those Three Happy Chappies have Landed!  For me, it was fun following their journey, awaiting in anticipation their arrival.  From hitting the shores of the U.S. (after being at sea for approximately 45 days) to arriving at the warehouse, then being shipped to retailers and finally descending to land on my front porch!

This was a sculpture I've campaigned for many years and not only appreciate WDCC/Enesco putting up with my constant 'reminders' but following through with such an amazing sculpture!  The sculpture captures the brilliance, emotion and bold (and vivid) colors of the film.  I am personally pleased that they went with the serape as the base for the sculpture and gave the sculpture such a sense of motion.

Something I didn't pick up in the photos was how Panchito was painted. I like that they went with a shinier finish on his clothes and a more matte finish on his body.  It makes his jacket and trousers really stand out.

Plussed with pewter spurs on Panchito and a pewter ribbon on Donald’s hat, this muy grande sculpture embodies the fun and fiesta spirit of this animated carnivale of animated delights.
"Airborne Amigos' sculpted by Bruce Lau is a Numbered Limited Editioin (NLE) of 500 and one sculpture I've wanted to see done for many, many years ... Thanks WDCC!!!! 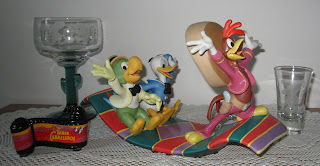 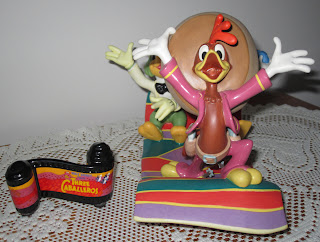 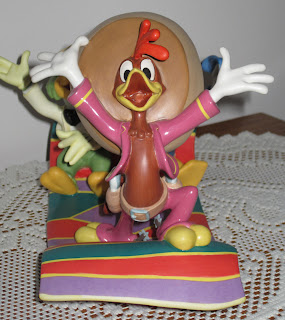 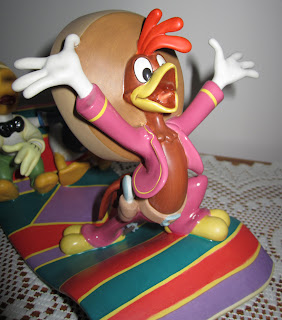 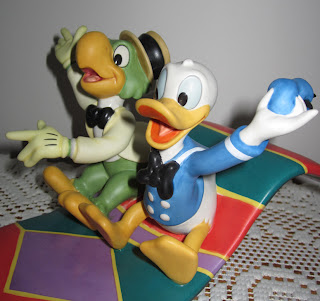 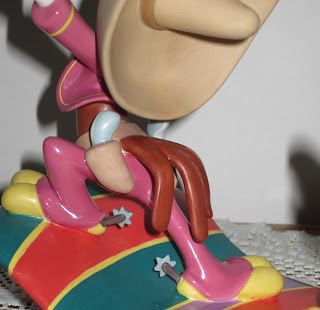 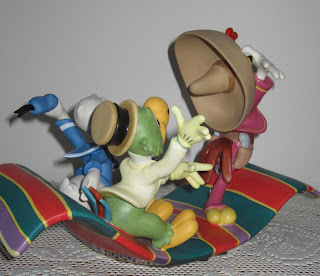 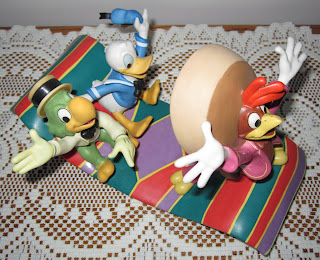 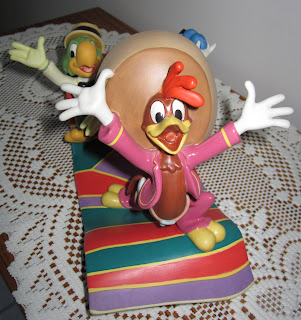 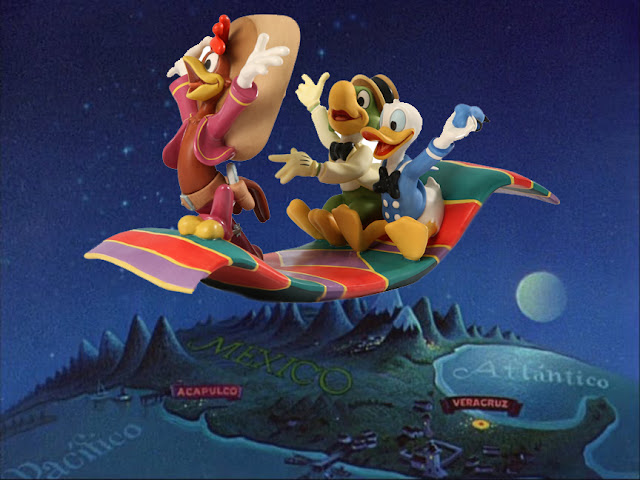 The Three Caballeros has started to ship!!

Received an email yesterday, my dealer received a portion of their order and mine was shipped and on its way!!

Those Three Happy Chappies should be making their descent and landing in New Castle by tomorrow!!
Posted by DC Pop Fanatic at 6:00 AM 2 comments

WDCC Announces the 'Sold Out' Status of Captain Hook!

The Walt Disney Classics Collection announced today the Sold Out status of Captain Hook from the recent Spring 2012 Announcement!

'Silver-Tongued Scoundrel,' a Numbered Limited Edition (NLE) of 500 was sculpted by Patrick Romandy-Simmons and plussed with bronze (Captain Hook's sword and moustache) and pewter (Captain Hook's hands and sword hilt).

Signing Event at the Art of Disney in Epcot®

Enesco.com sent out an email blast for the upcoming Artist Signing Event at the Art of Disney, Epcot® to be held on Saturday, April 21st.

Join Figment on an expedition into breathtaking wonder and towering imagination!  Creativity is a never-ending adventure, and this intrepid, little dragon is the personification of that all-too-human quest to push the boundaries of the possible and discover uncharted territories of magic and dreams.


Recreating the memorable moment in “Heights of Imagination” in which Figment scales the summit of a snow-capped peak,  this new numbered, limited edition of 500 Walt Disney Classics Collection sculpture captures the daring mountaineer at the apex of his  creative powers.

Based on original attraction reference, Figment is hand-crafted of fine porcelain, hand-painted, kiln-fired and provisioned with real rope, metal flag pole and flag, and metallic paint on the pick axe.

Please visit The Art of Disney Parks web site for information about the event and how to order, information should be posted by February 27, 2012:

Conquer the heights of imagination with Figment as your guide!

Special Note:   A limited number of Figment Heights of Imagination will be made available at Disneyland® Resort following the Epcot® premiere, subject to availability.
Posted by DC Pop Fanatic at 6:30 AM 3 comments