Meguro-ku, Tokyo, February 25, 2013—The Walt Disney Company Japan announced today that it will stage the first-ever D23 Expo Japan, a special event for Disney fans created by D23: The Official Disney Fan Club. D23 Expo Japan, the first Expo to be held outside the U.S., will feature an array of engaging presentations, hosted by senior Disney creative executives, showcasing what’s on the horizon from across The Walt Disney Company, including theme parks, movies, television, music, and interactive gaming. Fans will enjoy unique experiences; have the opportunity to purchase one-of-a-kind merchandise and collectibles; meet many of their favorite Disney characters; and delight in countless other surprises. D23 Expo Japan will take place October 12–14, 2013, at the Tokyo Disney Resort® in the Maihama area. Expo ticketing and program information will be announced in March.

This event is supported by JCB Co., Ltd, and The Dai-ichi Life Insurance Company, Limited as official sponsors.

Disney fans from around the globe flocked to Anaheim, Calif., for the first D23 Expo: The Ultimate Disney Fan Event, in September 2009, followed by a second in August 2011. The next D23 Expo will take place August 9–11, 2013, at the Anaheim Convention Center and will feature: the 2013 Disney Legends Ceremony; a special exhibit from the Walt Disney Archives; the Collectors Forum, where Disney fans can buy, sell, and trade Disney collectibles, memorabilia, and merchandise; an all-new Fan Art Contest themed to the upcoming 50th anniversary of Mary Poppins, and a massive show floor full of special opportunities to see what’s on the horizon for Disney around the world. 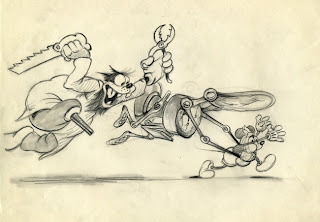 "Mickey's Toothache," from 1938 shows the famous mouse being chased
by a dentist's chair and nemesis "Pete" during …

More than 80 years after his creation, Mickey Mouse continues to surprise.
The Disney archives have released a newly discovered sketch from 1938, Mickey’s Toothache, part of an incomplete cartoon that was part of an effort to make Mickey a more complete character.
In Mickey’s Toothache, created in April 1938, artist Ferdinand Horvath has the newly adventurous Mickey experiencing something akin to a psychedelic nightmare. In the words of Disney Archives Director Becky Cline, Mickey has traveled to the dentist and fallen under the influence of too much laughing gas. The overdose sends Mickey into a “nightmarish world inhabited by living teeth, dental floss, a psychotic dentist’s chair and a vengeful pair of dental pliers," said Cline.
Mickey’s then-nemesis Pete also makes an appearance in the nightmare scenario. It culminates with Mickey being put on trial led, of course, by a judgmental wisdom tooth, who charges Mickey with tooth neglect.
The previously forgotten piece of artwork was discovered in the Walt Disney Archives, hiding out in a folder lost for more than 74 years. It was unearthed just a few months ago.
Mickey’s Toothache is just one of several unveilings being planned as part of this year’s D23 Disney Fanniversary Celebration, an event that began last year as a way to include members of Disney’s official fan club in some of the company’s milestone events. The Horvath image will be included in a 90-minute presentation showcasing some of this year’s other major Disney anniversaries in 10 different U.S. cities (Boston, Chicago, Los Angeles, Newark, Orlando, Phoenix, San Diego, San Francisco, Seattle and Washington, D.C.).
“Mickey has been a superstar from almost the beginning. He was immediately popular,” Cline told Yahoo News. “By 1938, he was just about to step into a finished version of himself. He was boyish and impish. During this period of his growth he became larger than life in some ways.”
Cline says the artwork showcases the transformation of America's favorite mouse from popular fad to American icon. It's one that can be seen as well in released cartoons of Mickey engaging in various adventures in locales including the deepest jungles of Africa, or in the 1936 cartoon Through the Mirror.
“Mickey was kind of growing and stretching. He left the barnyard, and he started to become more adventurous,” Cline said.
Though most people think of Walt Disney himself in relation to his most-famous individual creation, Horvath was a significant part of the early Disney years. Born in 1891 Horvath spent time in a Russian concentration camp where he taught himself to draw before immigrating to America on Armistice Day 1921. He worked for the studio from 1934 through 1944, producing between 70 and 80 animated shorts along the way and working on the production of Snow White.
Last year, we brought you the story of a newly discovered, 85 year-old Oswald the Rabbit sketch, Harem Scarem. Since then, Disney has pushed forward with efforts to bring Oswald, a Mickey prototype of sorts, back into the Disney fold.
So, will we ever see a complete version of Mickey’s Toothache?
“It’s possible,” Cline said. "The animation research library still goes back and refers to those older cartoons. ... Even though we’re still discovering some of this material for the first time in decades, they’re not lost.”
Posted by DC Pop Fanatic at 6:00 AM 0 comments