The following sculptures for Second Quarter 2007 have release date changes:

3. Pluto on Drum (Open Edition-Mickey Mouse Club) was originally a May release, will begin shipping in June, 2007.

4. Scotland Boy with Highland Castle (Open Edition-It's a Small World Series) was originally a May release, will begin shipping in July, 2007.

The remaining Second Quarter introductions to remain as originally announced.

Dry Retirement from Nightmare Before Christmas! 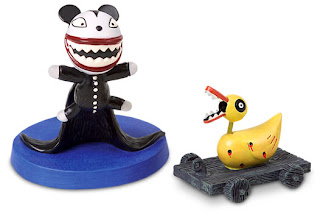 On Thursday, 04-26-07, the Walt Disney Classics Collection announced the 'dry retirement' of Scary Teddy and Killer Duck ("Predatory Presents") from Tim Burton's The Nightmare Before Christmas.
Scary Teddy and Killer Duck were released in July, 2006 as an Open Edition release with a SRP of $50.00 (for the set) sculpted by Patrick Romandy-Simmons.
A dry retirement means that there is no more product in the warehouse. Please check with your authorized dealer for availability.
Posted by DC Pop Fanatic at 4:36 PM 5 comments

2007 marked the debut of the Silly Symphony Series with the release of the Ugly Duckling and his Mother ("A Loving Embrace") in February.

The second release is scheduled for May, 2007 with the release of The Old Mill ("Pastoral Sunset") followed by the Opening Title (pictured at left) in June.

This new series, one I personally am looking forward too, is not the WDCC's first time where a Silly Symphony short was the subject of a WDCC release. In 1993, entering it's sophomore year, the WDCC released The Three Little Pigs which consisted of the Open Edition releases of Fiddler Pig, Fifer Pig, Practical Pig and an Opening Title plus a Numbered Limited Edition release of the Big Bad Wolf all sculpted by Kent Melton (except for the Opening Title).

In 1995, the Walt Disney Classics Collection launched the Enchanted Places (background settings and miniatures) and included each of the Pig's homes (sculpted by Terry Izumi) and miniatures of Fiddler, Fifer and Practical Pig (sculpted by Robert Olszewski) plus an Open Edition release of the Big Bad Wolf in 1996.

During the Disneyana Convention of 1998, the Open Edition releases of Fifer, Fiddler, Practical Pig, the Big Bad Wolf, Opening Title and Enchanted Places releases were all honored with retirement.

In 2000, the Walt Disney Classics Collection introduced the Duos Series and once again a Silly Symphony short was the first release, this time Max Hare & Toby Tortoise from "The Tortoise and the Hare" (1934). Max ("The Blue Streak") and Toby ("Slow But Sure") were a boxed set Limited to Production Year 2000 and sculpted by Patrick Romandy-Simmons.

Each short is listed separately within the Secondary Guide but also compiled together under Silly Syphony Series for easy tracking.

Rumor has it that a future release could be Little Hiawatha. Nothing has been confirmed at this time. I personally would like to see Wyken, Blyken and Nod (a single sculpt would probably be the most effective) and Elmer Elephant & Tilly Tiger from "Elmer Elephant" (preferably a boxed set).

A complete listing of the Silly Symphony shorts can be found at The Big Cartoon Database. 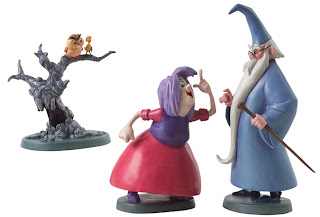 The Sword in the Stone may have been forgotten or ignored by some, but the wizard's duel between the backhanded Mim and the wise Merlin remains a memorable highlight from the film and the Walt Disney Classics Collection recreates this moment in it's first Gold Circle release for 2007!

This release not only marks the WDCC debut of Merlin, Archimedes and Madam Mim but also giving Mim the distinction of being the first Villain to be the subject of a Gold Circle release! Merlin & Mim were sculpted by Bruce Lau and Archimedes and Wart sculpted by Jacqueline Perreault Gonzales.

The first Gold Circle release was in 1997, Donald Duck from "The Wise Little Hen" and since, the sculptures have been the debut releases of some of the Fab Five characters, Winnie-the-Pooh, Disney couples, the Walt Disney Studios Holiday Card series and the first releases from Disney's It's a Small World series based on the theme park attraction to name a few. 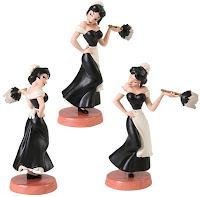 Earlier this week, a grouping of Belle & Prince (also from the 2007 Signature Series release) were added and joining them is Babette, the castle maid who makes Lumiere's flame flicker!

This is Babette's second appearance in the Walt Disney Classics Collection. She made her debut in 2002 in her enchanted objects form, as the Feather Duster.

Trivia: She did not have a name in the 1991 theatrical release, though some had referred to her as Fifi. It wasn't until the Broadway release in 1996 that she was given the name Babette. 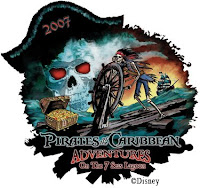 As your Adventures on the 7 Seas Lagoon near, more treasures have been uncovered!
For those attending the Pirates of the Caribbean Adventures on the 7 Seas Lagoon (May 22-25, 2007) here's an update on the WDCC seminars taking place on Wednesday, May 23rd!
The seminar will be hosted by Disney veteran Tim O'Day and joining Disney Legends, Alice Davis and Harriett Burns (previously announced) will be David Pacheco, Creative Director and Ruben Procopio, Animator and Sculptor. Ruben sculpted the Pirate with Pigs ("Drink Up Me 'earties!"), the fourth release in the Pirates of the Caribbean Series and one of the Treasures of Tortuga.
In addition to the special seminar, some WDCC treasures have been uncovered and will be shown for the very first time! An event Auction will include some rare Whiteware and Artist Proofs of WDCC sculptures including the Pirates of the Caribbean Series and past Disneyana and Walt Disney Art Classics convention event exclusive pieces.
All guests are welcome to attend Public Day Friday May 25th and to register for the Auction (fee applicable) through Walt Disney Event Services to bid remotely.
Follow the link above or the Helmsman Pirate for more details!
Posted by DC Pop Fanatic at 1:57 PM 3 comments

Ludwig von Drake is Donald Duck's eccentric uncle. His first appearence was hosting the first episode of the television show Walt Disney's Wonderful World of Color on September 24, 1961. He went on to host 18 more episodes of the show.
Professor von Drake, an Open Edition release marks his WDCC debut and one of the first 2007 sculptures to bear the 2007 production mark, Captain Hook's hook.
This new backview angle shows the detail of the two pages in the book that Professor von Drake is holding, the attention to detail that we've come to expect from the WDCC. The globe is made of porcelain, the stand of various metal components and actually spins!
"Didactic Duck" has a SRP of $175.00 US and was sculpted by Bruce Lau.

Welcome to the Duckman's Blog! 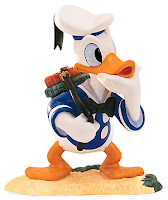 Welcome to the Duckman's Blog!

A new section to the website that we're testing as the potential new 'Newsflash' section plus not only updates to recent and upcoming releases but also looking back at past releases as part of the 15th Anniversary of the Walt Disney Classics Collection. 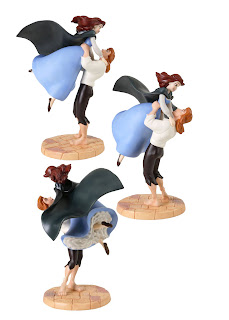 Here is a grouping of additional angles of Belle & Prince from the upcoming Signature Series release for 2007. "The Curse is Broken" is after the Beast is transformed into the Prince and includes the following Enchanted Objects in human form, Mrs. Potts & Chip, Cogsworth & Lumiere and Babette.

Additional angles of the Enchanted Objects in human form are forthcoming. Am learning it takes a lot of time and patience in cleaning images but am really enjoying this new learning experience.
Posted by DC Pop Fanatic at 2:07 PM 7 comments

The Feature Animation Building, a Numbered Limited Edition (NLE) of 500 which was one of two featured sculptures at the 2002 Celebration of Art Classics Convention has been seeing a healthy secondary value the past few weeks based on recent eBay auctions, ranging from $225.00-380.00 US (original SRP was $160.00 US).
When this sculpture was announced as one of the featured sculptures that year, it was met with a lot of negative reaction as was the other featured sculpture for that convention,
Cameraman Mickey. Appears both ended up not being bad choices after all.
Thanks Michelle!
Posted by DC Pop Fanatic at 10:16 AM 3 comments 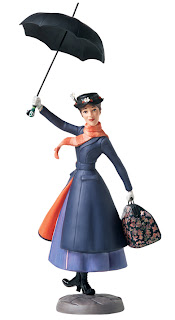 A hit with collectors! Mary Poppins appears was a wise choice as the 2007 Spring Event featured sculpture. Most dealers I spoke with had to order more, selling out of their initial order in pre-orders. Haven't recalled an event sculpture doing so well in recent years.

An interesting note on Mary Poppins that I was unaware until I received my sculpture, her umbrella top is a separate piece. Included with each sculpture is instructions on how to attach the umbrella top to her handle. These instructions have been added to the Secondary Guide for easy reference.
Mary Poppins was the 2007 Spring Event Sculpture (March 23-25, 2007). A Numbered Limited Edition (NLE) of 3,500 sculpted by Kent Melton. SRP $175.00 US.

Pirate with Pigs from the Pirates of the Caribbean Series 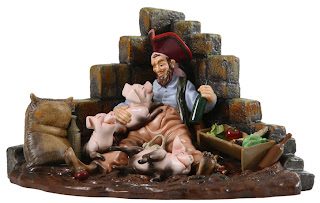 To view images of the unpainted resin prototype for the upcoming Pirate with Pigs sculpture ("Drink Up Me 'Earties!") from the Pirates of the Caribbean Series sculpted by Ruben Procopio, please check out Ruben's blog, Masked Avenger Studios.

The Pirate with Pigs is the 4th release in the series and will be making it's debut May 22-25, 2007 during the WALT DISNEY WORLD® Resort Pirates of the Caribbean: Adventures on the 7 Seas Lagoon special event. 500 sculptures will debut at the event with a special event backstamp.
Posted by DC Pop Fanatic at 3:02 PM 3 comments 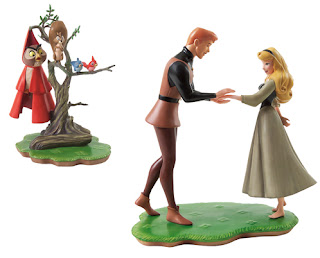 The much anticipated Prince Phillip & Briar Rose (originally scheduled for March, 2007 release) has begun to arrive in stores this past week. Spoke to Ray at Gallery of the Lakes over the weekend and he shared the following:

"Philip & Briar Rose began arriving this week...it will really be one of the most beautiful pieces in the collection. I'm amazed at the hands & the unsupported open space between them...incredible sculpting and the final paint detail on Philip makes him one of the best looking princes to date & a lot more 'sturdy' looking than the early pictures led us to believe. She's innocently stunning."