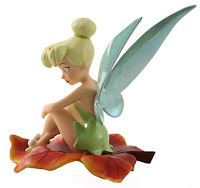 Tinker Bell is both the Fall Premiere Event featured sculpture and First Release in the new Disney Artist Series.

Introduced in Walt Disney’s Peter Pan, Tinker Bell has a glowing nature that has made this pert little pixie a shimmering symbol of all things Disney. As feisty as she is cute, this bright little sprite sometimes gives off more heat than light, but there’s no denying her loyalty or her loveliness,especially as she fetchingly poses on a colorful Never Land leaf.

The Fall Premiere Event, Fall for Tinker Bell will be taking place worldwide on October 17-19, 2008. This sculpture ("Blithe Spirit") is a Limited Edition of 2000, sculpted by Margi Wray, who also sculpted the 2005 Tinker Bell Disney Bank One Visa Credit Card Exclusive, "A Touch of Magic".

The First Release from this new series will honor David Pacheco. The artists name will be included as part of the backstamp. Future releases will either be limited or subject to retirement. David will be special guest at a special signing at Disneyland® Park (details below). 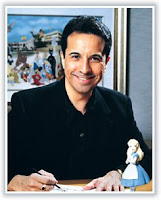 Special Note: Merchandise available while supplies last. Only two (2) items be signed per Guest. No personal items to be signed. Event merchandise must be purchased on the day of release at the event location. Valid Disneyland® Resort receipt may be required. Artist signing is subject to space and time availability and is not guaranteed. Artists will only sign their respective merchandise purchased on the day of the event only. Event information subject to change without notice. Separate admission is required to enter Disneyland® Resort theme parks.

Additional Special Note: There will be no amenity gift from Aribbas Brothers for the Fall for Tinker Bell Event. For past sculpture events, a special gift with purchase was created by Aribbas Brothers for Walt Disney Classics Collection events held at Disneyland® Park.

For those unable to attend the special signing event at Disneyland® Park and still looking for Tinker Bell, click on Tinker Bell (at right) for a complete listing of Authorized WDCC Dealers who are participating in this sell-out event! This listing has been updated for the United States, United Kingdom and Europe who will be participating in the event. For dealers in Canada and Asia, please contact those dealers for availability. The dealers listed in those areas was based on the active authorized dealer listing as of February, 2008. 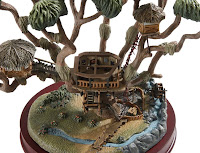 We've just completed our first poll on Blogger! Thanks to everyone who participated! The participation was much larger than I expected, compared to participation on previous Delphi polls I've conducted.

I noticed throughout the poll, Bloggers results never added exactly to 100%, so the accountant in me will recalculate based on the number of people who voted in each category to the total :)

The results are as followed:

Based on the above results, 26% plan to either purchase or will definitely purchase compared to 63% with no plans to purchase and 11% still unsure. Haven't heard how pre-orders are so far. Personally, am looking forward to seeing in person in a couple months.

Added a new poll today - Your Choice for 2009 Membership Gift. Matthew, thanks for your suggestion for this poll.

I will leave the results up for the Treehouse Poll for a few days for anyone who wants to see/compare the final results. Thanks again to all who participated!
Posted by DC Pop Fanatic at 5:45 AM 5 comments

New Feature at the Blog!

Prior to opening the Cafe in Duckburg, tested the survey/poll option offered by Blogger but at that time, there were glitches with it. Decided this morning to test it again and nice to see that feature is now working!

The first poll is on the upcoming Swiss Family Robinson Treehouse. Currently, your polling choices are limited to four (4) options but still a nice addition, nonetheless. This current poll is set up for seven (7) days as a test.

In addition to this feature, we'll still continue to do surveys/polls at the Duckburg Cafe as well. 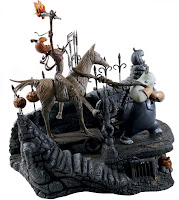 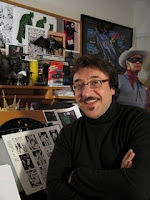 It's Official! Bay Lake Tower is the next DVC! 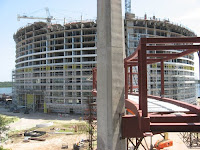 Rumors have been circulating since construction began, if the new building replacing the Contemporary's North Garden Wing would be the next DVC (Disney Vacation Club) development? It's been dubbed Disney's Best Kept Secret.

When we were down in May, I did a blog entry on the Contemporary Resort Construction showing how far the construction had progressed plus photos that showed the addition of the walkway that was connecting the new building to the existing one. We talked to a couple DVC castmembers and all rumors were pointing to it becoming the next DVC but nothing had been confirmed.

The rumors can finally be put to rest! It's Official! Bay Lake Tower (about 300 units that will be linked to the Contemporary Resort by a fifth-floor pedestrian bridge) is the newest DVC hotel with an estimated completion in Fall, 2009. This will bring the total of DVC resorts at Walt Disney World to seven (7). Bay Lake Tower will join Old Key West Resort, the Boardwalk Villas, Villas at Wilderness Lodge, Beach Club Villas, Saratoga Springs Resort & Spa and Animal Kingdom Villas. 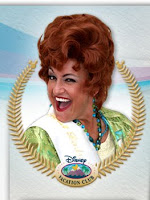 Update: Current DVC members will have the first opportunity to purchase these units, which will go on sale this Sunday. Prices for Bay Lake Tower begin at $18,000 -- the most expensive starting point of any DVC resort (for comparison, Disney's Animal Kingdom Villas, begin just below $17,000).

Check out AllEars.net for official photos from Disney that show proposed renderings of the outside during the day, night and interior shots of the one-bedroom living area, bedroom & bath plus Bay Cove Pool.

The news was broken by Deevy See (pictured above) regarding Bay Lake Towers, the First Lady of Disney Vacation Club! The Travel Channel will air a special on Thursday evening, September 18th at 8:00pm EST entitled Season of Disney: Disney's Best Kept Secret. The special will show viewers the newly unveiled resort.

Since Deevy See won't be in the special, she's taped her very own YouTube sneak peek:

While working on updating the Secondary Guide with the 2nd and 3rd quarter releases for 2008, decided to get a start on the new Mickey's Christmas Carol scene featuring Mickey Mouse ("Earnest Employee"), Donald Duck ("Festive Fellow") and Scrooge McDuck ("Mirthless Miser") and purchased Mickey as Bob Cratchit. He arrived today!

Given the height of the sculpture (10-1/8") when the scene was announced, in no way was I prepared for the size of this sculpture! Mickey is friggin' huge! As I type this entry, have him sitting on top my roll top desk next to Elliott (from Pete's Dragon) and Mickey almost dwarfs him! I'm curious to see how the Parkwest/NALED version of Scrooge looks with Mickey as far as size comparison and if possible to work that sculpture into this scene. Would love to see Rat and Mole added to possibly work with that Scrooge and create another scene.

As others have said, Ruben did an amazing job! I like the added touch of the writing on Mickey's ledger and the word 'Notes' on some of the papers strewn on the floor. Using resin for the main parts of Mickey's desk, allows to capture all detail and wood grain effect in the desk and chair. Another thing I wasn't aware (unless I missed in the announcement information), the sculpture bears a 25th Anniversary backstamp.

The next release in this series is scheduled for next year. Am curious on what direction they're going to go. It appears this scene is doing quite well from talking to both collectors and dealers.

09/10/08 Update: Updated this entry to include the opening credits of Mickey's Christmas Carol (courtesy of YouTube.com) that open the movie to the sequence Jason described of the Big Bad Wolf and the 3 Little Pigs as Scrooge (in the Parkwest/NALED pose) walks by (1:59/2:06).

A New NLE Unveiled in the Upcoming Sketches! 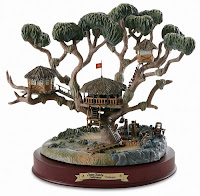 Unveiled in the upcoming Sketches, is a Numbered Limited Edition (NLE) from the epic live-action film, Swiss Family Robinson.

Shipwrecked on a deserted island, the resourceful Robinson family sets out to boldly turn a bad situation into a glorious escapade by building the most wonderful treehouse ever seen. This remarkable sculpture features living quarters with removable roof and detailed furnishings within.

The Swiss Family Robinson Treehouse was sculpted by Larry Nikolai, a NLE of 750 with a SRP of $225.00. The Treehouse is plussed with 11 resin components, 32 metal components and string.

The Treehouse like previous Enchanted Places releases, includes an engraved brass nameplate on the base which was not included on the bases of the Cave of Wonders (2006) and/or the Old Mill (2007). The Treehouse is slated for an October 2008 release.

You can also join the Swiss Family Robinson Treehouse Discussion at the Duckburg Cafe.
Posted by DC Pop Fanatic at 10:00 PM 13 comments

Happy Labor Day to all who visit either the Blog, Website and/or Cafe today!

Labor Day is a national legal holiday that is over 100 years old. Over the years, it has evolved from a purely labor union celebration into a general "last fling of summer" festival.

Labor Day is observed not only in the U.S. but also in Canada, and in other industrialized nations. While it is a general holiday in the United States, its roots in the working class remain clearer in European countries.It has come to be recognized in the U.S. not only as a celebration of the working class, but even more so as the unofficial end of the summer season. In the northern half of the U.S. at least, the summer vacation season begins with Memorial Day and ends with Labor Day.

State parks, swimming pools, and campgrounds are all quite busy on Labor Day, as vacationers take one last advantage of the waning hot season. September marks the beginning of autumn.

A Safe and Happy Labor Day to All!