Why, I'm the Ghost of Christmas Past!

Wisecracking and wise, Jiminy Cricket has given plenty of guidance ever since he was first appointed as Pinocchio’sconscience.

Given how often his spirited counsel has lighted the straight and narrow path, it’s appropriate this clever cricket sits beneath a glowing candlestick in his sterling role as the Ghost of Christmas Past.
The Ghost of Christmas Past was the first of the three spirits (after the visitation by Jacob Marley that haunted the miser Ebenezer Scrooge in order to prompt him to repent. He showed him scenes from his past that occurred on or around Christmas, in order to demonstrate to him the necessity of changing his ways, as well as to show how Scrooge came to be the person he was and his particular dislike for Christmas – most of the events which negatively affected Scrooge occurred around the Christmas holiday season. 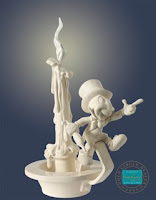 Jiminy, sculpted by Ruben Procopio (a Numbered Limited Edition (NLE) of 2,000) is the Fall Spirit of the Season Premiere Event sculpture. He will be available through all participating Walt Disney Classics Collection dealers and the Walt Disney Theme Parks, September 25-27, 2009.

Absolutely love both versions of this piece!! Cannot wait to have them both in-hand!

Ruben did another fantastic job!

Thanks, Don for always doing a superior job with the photos and blog entries! You are one in a million!!!!

This is the first piece that I saw photos of. I gasped! Jiminy is one of my favorite characters and this piece captures him with such life and "spunk"! I was just so tickled with this piece, I even teared up a bit (yeah, I'll admit it)! Great when a piece of porcelain can do that to you!

The color, pose are wonderful! I don't want to wait until September but it will make a wonderful birthday gift to myself! LOL

Hope to be able to get the beautiful whiteware as well!
Matthew

Love this Jiminy! And I appreciate your great photos, Don--the multiple angles are terrific. I was worried that we weren't going to get a Pinocchio character this year (I'm still waiting patiently for Alexander), and this may be the best Jiminy yet. Again, thanks for all of your up-to-the-minute postings, Don. You make my Sketches magazine almost unnecessary.

This is a great little piece. I'm pretty excited about it. Prob my fov of the Jiminy's out there.

As one of my favorite characters I welcome any sculpt of Jiminy WDCC produces.

This one is special as Mckey's Christmas Carol has always been one of my favorites.Keeping my fingers crossed that I'm able to get the Whiteware version given the low edition size.

Great job and thanks WDCC and Ruben.

Don thank you as always for the great images and all your hard work.

The releases from this movie have just been out of this world. I can't wait to get both of these pieces as well.

Ruben's work continues to amaze me, he captures the true feeling and essence of each moment in time so well.

Toni-Thanks BFF! This is my favorite of the 3rd Qtr. announcements. From the photos available, this could be the best Jiminy done to date!

Matthew-I think you described this piece perfectly. Ruben captured Jiminy's personality to a T! Like you, hate to have to wait until Sept. for this one.

TOFU-You're welcome! Like you impatiently waiting for Alexander as well. We seem to be in agreement this could be the best Jiminy to date. Next year being Pinoochio's 70th Anniv., hope we're treated to more from this classic film and finally get our Alexander!

Bob-When I first saw this image, thought of you and Matthew immediately, knowing what huge Jiminy Cricket fans you both are. Hoping that you and Matthew will both be successful in getting a whiteware version as well.

Geoffrey-Ruben has been hitting them out of the park with each and every Mickey's Christmas Carol release. Can't wait to see what he has in store for us next!

Babs-Great trivia question! I had to go to Ruben's Sculptor page to see what the other might be .. why it's the Genie from Aladdin!

hey Don...don't forget the Mickey piece from the Christmas Carol he's also pointing his finger too. That's the one I was thinking of.

Wow, like Toni, I really want to add both to my collection. I really love this.

Undecided on the whiteware. The whole concept of whiteware never appealed to me.

The "final" version of this piece will for sure be a part of my collection. This is a fantastic version of Jiminy Cricket.

Greg-Whiteware has never appealed to me as well as having within my collection. I do have the Jiminy Progression, which I'm quite content with, showing the various stages of production. Hopefully all those interested in the whiteware version will be successful in getting one.

Can not wait for the release of the painted version, as this is one I definitely want in my collection!