Lyrics to 'Trick or Treat' 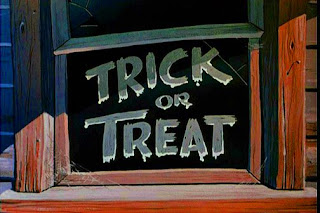 "Trick or Treat" is also the title for the great bouncy song in this cartoon written by Paul Smith. It is sung by the great "Mellomen" which included the voice actor Thurl Ravenscroft. I promise you will be singing this all evening and into tomorrow, once you hear it ]:)


Every post
Is a ghost
If you've got a witch's brew
And if you want your gate to circulate
Ho ho! We can do that too!

Today is the day when pumpkin shells cast evil spells and witches, ghosts and goblins by the score, who will be knocking at your front door!

The Walt Disney Classics Collection put everyone into the "Halloween Spirit" in Fall 2001 with the release from the 1952 animated short, "Trick or Treat," one of the most beloved and well-remembered of the Duck cartoons. Trick or Treat marked Witch Hazel's debut and the first screen depiction of trick or treating.

Huey, Dewey and Louie visit Donald's house for Hallowe'en, but Donald turns the tricks on them. Sorry to see that Donald Duck is playing tricks on his nephews, Witch Hazel sets out to help them have the happiest Halloween ever. And if the boys "Unca" Donald doesn't want to give out any treats, he better be aware the tricks Witch Hazel has brewing in her cauldron!
It was this moment that the Walt Disney Classics Collection depicted in their scene release which consisted of Donald's Nephews (dressed respectively as a ghost, witch and devil), Witch Hazel and a very detailed Cauldron Base where Witch Hazel begins to brew her potion. The complete scene was sculpted by Chris Peterson.
Witch Hazel's Spell: "Double double, toil and trouble. Fire burn and cauldron bubble. Eye of needle, tongue of shoe, hand of clock that points at two... This is the real thing you know, right out of Shakespeare."

The 'Trick or Treat' Scene (Witch Hazel, Donald's Nephews (Huey, Dewey and Louie) and Cauldron Base) was honored with retirement on Friday, October 29, 2004. The Opening Title was NOT retired. 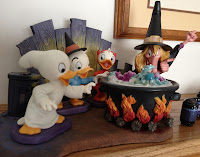 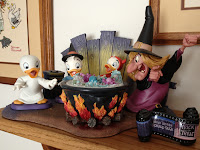 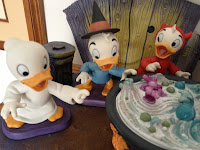 As a special treat, below is the animated short for your viewing pleasure (courtesy of YouTube.com).
So grab your favorite witch's brew and some candy treats and Enjoy!

Trick or Treat is a Donald Duck Cartoon ©Disney
Posted by DC Pop Fanatic at 6:00 AM 0 comments

Looking Back: The Headless Horseman and Ichabod Crane

Given my obsession with the new series on Fox, Sleepy Hollow, I thought a great Looking Back would be revisiting the Headless Horseman set, a favorite of most Walt Disney Classics Collection collectors!


"When thundering hoofs echo through the darkness in the tiny valley of Sleepy Hollow, fearful farmers pull the covers over their heads.

The only man foolish enough to be on the roads on such a night is Ichabod Crane. But is that ghastly figure bearing down on the teacher a wrathful spirit -- or just a jealous prankster?"
This set is one I have displayed all year round.  One of the Walt Disney Classics Collection best releases.  In this set you have both an animated style horse and the sculpting of a life-like horse plus the look of utter fear in both Ichabod and his horse's face (and body expression) and true terror embodied by the Headless Horseman and his horse.
The Headless Horseman ("Haunting Horseman") and Ichabod and his Horse ("Terrified Teacher"), a NumberedLimited Edition (NLE) set of only 3,500, plussed with a stainless steel sword were sculpted by Kent Melton.
Redemption forms were sent to active Walt Disney Collector Society members in July, 2000. Orders were taken on a first come-first serve basis. Sculptures began to ship in Fall, 2000.

My display is enhanced with resin tombstones replica of tombstones from the Haunted Mansion Attraction that was available last year (and again this year) thru Disney Shopping. The tombstones fit in perfectly with the set. I had really hoped they would have done more this year. 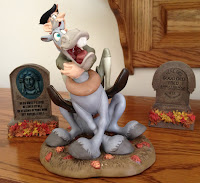 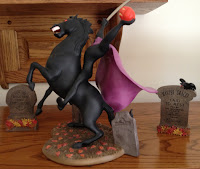 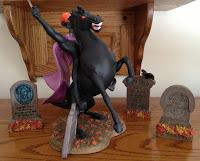 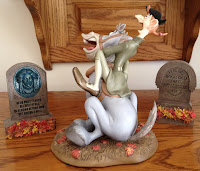 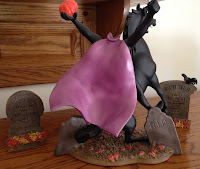 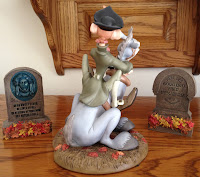 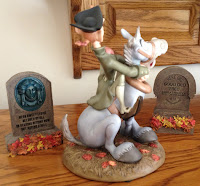 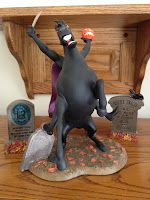 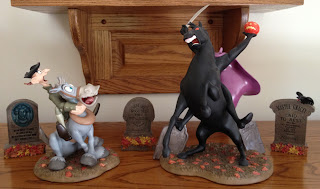