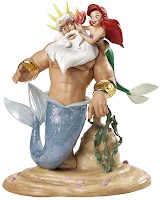 Happy Father''s Day to all the Dads who visit either the blog and/or website today.

The Walt Disney Classics Collection has released some significant sculptures over the year's depicting that special moment of a father and child.

One that has personal meaning for me is King Triton & Ariel ("Morning, Daddy!"), a 2004 Numbered Limited Edition (NLE) Gold Circle Exclusive sculpted by Patrick Romandy-Simmons.

Also released were the following:

Thanks Don. Same to you. Happy Father's Day. I have all the pieces in the living room curio (along with the Mother's Day type ones and all the baby ones). They are great to look at.

Hope all fathers had a wonderful day as I had. Enjoy.