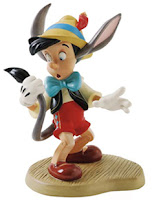 Little did we know, when we were discussing the Pool Table Scene last month, the Fourth Quarter Announcement would include a new release from that sequence, Pinocchio as a Donkey Boy!

The wording received indicates this rarely portrayed moment completing the Pool Table Scene but hopefully future releases will include the Coachman as well as Alexander and possibly even Lampwick as a Donkey Boy as well.

"A Terrifying Tail" (5") is a Numbered Limited Edition (NLE) of 1,500 scheduled for release in October, sculpted by Dusty Horner who sculpted the complete Pool Table Scene released in September 2006.
Posted by DC Pop Fanatic at 12:00 PM

Well, knock me over with a feather.

When we all were trying to guess if they were going to do a donkey-earred Pinocchio, and if so, whether it would be a Pleasure Island or an Underwater scene, I never thought for a moment that it would be considered the "scene completer" to the Pool Hall sculptures.

Quite frankly, I don't understand why this is considered a scene completer. Pinocchio's transformation happens in a later sequence; how can there be two Pinocchio's in one scene? Am I the only one confused by this. Did anyone think this piece would be the talked-about scene completer?

The good news, as you pointed out, Don, is that this may open the door for a Coachman, a donkeyed Lampwick, and maybe even that poor neglected Alexander.

When I get the new Pinocchio, I won't display him with the Pool Table. Instead, I'll put him by himself with open space all around him, and then start wishing on that star for a Coachman to join him.

Personally, I think the use of scene completer was used in error regarding the upcoming Pinocchio Donkey Boy release for the same reasons as you stated -- it's another sequence within the Pleasure Island sequence and wouldn't classify him as a scene completer.

My reasoning (and maybe it's my half full vs. half empty take on things) is hoping WDCC is treating the Pool Table sequence as they did the Tank Gang scene. They started that scene with 3 releases (Bloat, Bubbles and Gill), followed with the Members Only release of Nemo & Gurgle and then 3 additional releases (Jacques and the Tiki Hut and Gods).

Keeping fingers crossed, we had the initial scene release (Pinocchio, Lampwick, Jiminy and Pool Table Base), the upcoming release of Donkey Boy Pinocchio followed at a later date with the Coachman and Alexander and wouldn't object to Lampwick as a Donkey Boy thrown in the mix. Very optimistic as you can see :)

Well it doesn't matter to me if someone was mistaken and called it a scene completer or the beginning of the next scene. I love this piece. Everyone's been wondering if we would ever see Pinoke as a donkey boy and sure enough WDCC listened to feedback given. Excellent piece!!

Absolutely agree. This is an excellent little piece and most of us were wondering if it will ever be done. A must have for me.

Another great release. Like others want the Coachman and Alexander.

Gotta agree with the earlier comments about the term, scene completer, not really fitting this piece. How can it be completing a scene that already has a Pinocchio in it? Definitely view it more as a continuation of the scene, showing what comes later after all the "fun."

While I think the piece is very well done and captures a wonderful expression on Pinoke's face (kudos to Dusty for another stupendous job), I would be more inclined to purchase if the Coachman, Alexander, and possibly a donkeyfied Lampwick were also released to make this more of a scene. So, hopefully they will follow in the future as has been suggested.

The Pleasure Island Scene is one I've campaigned for a lot over the years, specifically the Coachman and most recently, Alexander. I see this release as the door being opened to finally see these characters and wholeheartedly plan to support this release (as I did the Pool Table Scene) to show interest and support that we'll see both those characters, as well as a Donkey Boy Lampwick.

It's a gamble but I think if this NLE Pinocchio does well, our chances are better vs. taking that wait and see attitude, the pieces end up sitting in the warehouse and then our chances are dashed. Just my opinion.

Received the following regarding our discussion on the upcoming NLE Donkey Boy Pinocchio:

"The Numbered Limited Edition sculpture is not intended as a "scene completer" in the traditional sense of a sculpture scene since Pinocchio appears in the original sculpture scene. The text information made available with the sculpture image was conveying that the new sculpture along with the original scene shows the before and after transformation of Pinocchio in the movie sense of "scene completer" (essentially it shows what happens to Pinocchio after he ignores Jiminy's advice and is led astray by Lampwick). It was not intended to imply that we were finished with Pinocchio or that the Coachman and Alexander could not be future possibilities."

Wow, that leaves the door wide opened for the Coachman, Alexander, and a Donkwick, doesn't it?
I planned on buying Donocchio anyway since it is a NLE.
Love, love, love his expression.

Thanks, Don, for the info and comments. So many people appreciate the time and effort you put into this site. Did they really use the word "Alexander"? I can't imagine there's more than a handful of people who even know who that is!

Personally, I agree with you about showing support for possible additions to the scene by purchasing the Pinocchio now. Besides, it's an awesome piece in its own right.

Herc, I just love your names for those poor Pool Hall boys. I too will buy Donocchio and look forward to a future Donkwick. Not to mention an Alexanderkey.

Great names both Jeff and TOFU!

TOFU, I can confirm, Alexander was specifically mentioned. No guarantees he's in the pipeline but we're getting his name out there and hopefully we'll see him in the not so distant future along with the Coachman and Donkwick.

I LOVE Pinocchio in this form. What an expression! He will be added to my ever growing collection, as well as, the Coachman, Alexander, and Lampwick as a donkey (WHEN THEY COME OUT!!!) I'm rooting for them hold-heartedly! I really do hope that Pinocchio will be a GREAT SUCCESS, so we can have the other characters.

Tofu...glad you like the names. I just hope this new piece will be a hit. People have been waiting years for a donkey Pinocchio and now that we got him, I hope he flies off the shelf.

Like you Darcy, hoping Pinocchio hits a homerun out the box when released, does very well and followed shortly by the Coachman, Donkwick and Alexander.

If we get so lucky and see the release of Alexander, this will be a very rare portrayal of him, since I don't believe he's been done in any other medium as far as collectibles go.

And, Don, if we do get an Alexander, it will be all because of you, and I will be first in line at the "Have the Duckman Sign Your Alexander Sculpture" signature event.

Thanks Tofu but truly feel if we do see Alexander, it will be due to the joint campaigning and support by our little group here.

The support here for both the Coachman and Alexander has been amazing and the fact Enesco specifically mentioned Alexander in their response is encouraging.