All in a Golden Afternoon-Alice & Dinah 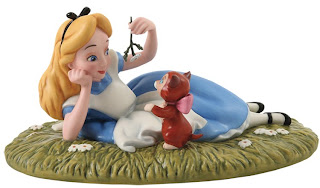 All in a golden afternoon, Alice daydreams in the daisies with her cuddly kitty, Dinah. A new and utterly irresistible entry in the Disney Artist Series, this sweet sculpture captures winsome Alice as she plays with her rarely portrayed pet, Dinah.

Alice and Dinah ("Riverbank Reverie"), a Numbered Limited Edition (NLE) of 1,500 was sculpted by Jacqueline Perreault Gonzales. Alice & Dinah has been selected as the Spring Premiere Event sculpture and will be available through all participating Walt Disney Classics Collection Dealers and the Walt Disney Theme Parks, April 23-25, 2010. This sculpture marks the third release in the Disney Artist Series and honors David Pacheco.

Not a big Alice fan here, but I'm so glad to see that this piece has finally been done. I know that so many have been asking for Alice and Dinah for so long. It's a cute scene!

I like this one. The Alice movie doesn't have a ton like some of the other films so it's a nice addition. PLus having a new character make an appearance is nice.

Like Matthew, not a big fan of this film. Glad for those who have been wanting Dinah.

Film has a lot of great characters but the story not really my cup of tea (pardon the pun).

This piece is a must have! So glad to see Dusty's name as the sculptor!

Alice and Dinah were sculpted by Jacqueline Perreault Gonzales. FYI.

I think this series is really a great one. Very nice to have this one done as it's been a requested pair for a while.