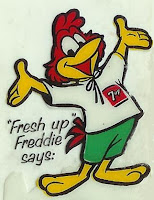 As many know, I'm a huge fan of The Three Caballeros, the 1944 animated classic starring Donald Duck & Jose Carioca and introducing Panchito. To my surprise while surfing, I came upon a character (Disney's biggest commercial cartoon star) who is celebrating his 50th Anniversary this year!

Meet Freshup Freddie, a cocky animated rooster representative of the 7-Up Beverage Company in the 1950s who gave lessons on how to plan successful parties and picnics by having plenty of 7-Up on hand.

Fresh-Up Freddie was the personification of 7-Up's happy slogans "Fresh-Up with 7-Up," "You Like It, It Likes You" and "Nothing Does It Like 7-Up." Freddie dressed in human clothing and sometimes wore a derby, bow tie, vest, slacks, spats, and garter band on his sleeve. Leo Burnett created the Fresh-Up Freddie ad campaign in 1957. By 1958, Freddie made his debut on the popular Disney TV series "Zorro."

Below is a 7Up commercial featuring Freddie from YouTube:

Great commercial clip. Was aware of the Orange Bird used for OJ commercials but never heard of Freddie. Did Disney animate any other characters for commercials?

First, they produced commercials featuring the classic Disney characters primarily for sponsors of the Disneyland television program like American Motors and Derby Foods. These commercials featured the classic Disney animated characters including Mickey Mouse, Pluto, Donald Duck, Tinker Bell, Jiminy Cricket, Alice and the Cheshire Cat and many others.

Second, Disney produced commercials for a variety of other accounts, often creating memorable new advertising character icons from Tommy Mohawk for Mohawk Carpets to Fresh Up Freddie for the 7-Up soft drink.

Besides Tommy himself, the commercials featured his demure Indian maiden friend, Minnie (short for "Minnehaha") and a mischievous squirrel known as Chatter who looked very similar to the character of Dale from Chip 'n' Dale, but with a smaller nose and a squirrel tail. He also wore a plain headband and a single feather and the oversized headband keeps dropping comically over his eyes.

Officially the Disney Studios closed its television commercial division in the late '50s although it would still occasionally dabble in the commercial world in the following decades.

Thanks Don. Interesting trivia. Wasn't aware of Tommy Mohawk either.