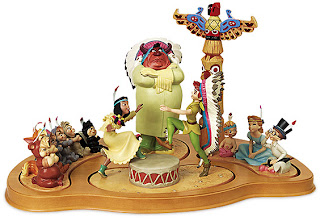 In 2005, the Signature Series release from the Walt Disney Classics Collection was from the animated classic, Peter Pan. This release marked the second appearance of the Darling Children (Wendy, Michael and John) and the debuts of the Indian Chief (Tiger Lily's father), the Lost Boys and (and my personal favorite) Tiger Lily.

I was finally able to put this magnificent scene on display this past weekend and can't help but marvel what an awesome job Dusty Horner did in not only bringing this 2D scene to life but also these characters from one of my favorite Disney films!

"Fireside Celebration" was a Numbered Limited Edition (NLE) of 1,000 and included a wooden base (pictured above) that gave collectors the choice to display with the base or without. I chose the latter.

Some have argued that it should have been released as a scene (each sculpt sold individually) vs. labeled as a Signature release since not a singular sculpt like "Soup's On!" (2000) or a multiple sculpt like "Off to the Ball" (2001), "The Finishing Touch" (2002) and "Magical Maelstrom" (2006). Personally, it doesn't matter whether a singular sculpt or scene that consists of multiple pieces but does the scene warrant itself a signature moment from the film chosen? Fireside Celebration does just that. One of my favorites of the Signature Series releases and one I will enjoy for years to come!

I have to agree the signiture series sculptures are incredible. I'm just afraid it will be the only depiction of certain characters that I really want in my collection. I was able to get just the Indian Chief from the Fireside Celebration and he is GREAT. Now I hope they'll release a scene with individual sculpts of the Lost Boys. Also, I really want a single Tiger Lily. Just out of curiousity, how large a collection do you guys out there have? Mine numbers just over 300 pieces. Am I obsessed or just your average Disney Freak?

Bill, being a huge fan of Tiger Lily myself, would have no problem of them doing a singular sculpt of her.

Given she is also part of this year's Numbered Limited Edition release, "An Irresistible Lure" with Captain Hook, Mr. Smee and Tick-Tock Croc, I think chances of seeing a third release are going to be slim :(

I'd like to see Follow the Leader done with John, Michael and the Lost Boys marching across the log. They could either do as a singular sculpt or do the log as a base with each Lost Boy, John and Michael as individual sculpts giving collectors the option of doing the entire scene or just specific characters.

I think your an average Disney Freak :) I've lost count when I hit the 300 mark and I think the majority here follow in the 300+ Piece Club!

Thanks Don, I feel better and am also excited to find fellow enthusiasts of the WDCC. The Tiger Lily question brings me around to a point I discussed with you earlier. I think she would be a great candidate for an alternate membership sculpture to keep us longtime members happy and try to manage the size of our collections.

This is a very enthusiastic group who have been collecting WDCC, most since it's charter year. Glad you found us.

You got it. I already have enough Snow Whites, Cinderellas, Bambis and Jiminy Crickets. Don't get me wrong, I think they're great and wonderful pieces for fans just beginning their collections. But I would love it if, also a second or "alternative" membership piece for renewers was offered. Members could choose which sculpture they wanted with their membership purchase. That way, maybe we could get our Lady Klucks, Tiger Lilys, maybe a Faun from Fantasia, etc. It would certainly make renewal a lot more exciting for me. What do you think?

Hi Bill
I like your idea of an alternate member sculpture, but I think some folks would probably want BOTH of them! (Like me) I do like the idea of a Member's Only piece which would be something like from a "Disney Rarities" series, to be able to offer those obsure type of characters to the die hard collectors.

I like your idea/suggestion Bill. I agree it would create some excitement amongst the long-time members.

I will be talking to Traci this weekend and plan to pass these ideas/suggestions off to her.

I've only got about 80 or so at this point. I haven't bought any since my local GC dealer switched hands a couple months ago.

The one thing that always bothered me was that they never completed the "Dance of the Hours" scene. I always thought that a sculpture of the elephant with the fish in the bubble would finish off that particular set. Oh well, a man can dream...

It would be great to see some of the more secondary characters getting pieces of their own or even characters from movies or shorts that haven't been represented yet, although that request has somewhat been answered with some of the great sculptures in the past year or so.

Michael, your comment regarding the Elephant from the Dance of the Hours sequence of Fantasia brings up a good point.

If you don't mind, something I will bring into its own posting for further discussion.