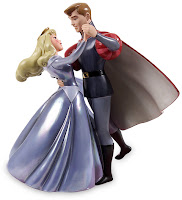 When the Walt Disney Classics Collection created the Dancing Blue Version of Princess Aurora and Prince Phillip, did Flora slip in a little pink? Did Fauna mix a little of both (heavier on the blue)? Did Merryweather win out and get a true blue version?

There has been two versions of this sculpture released and some even question if three. Received the following email from fellow collector Koen after purchasing a blue version of the Dancing Aurora:

"I just received "A Dance in the Clouds"', the blue version. I was wondering if I had the light blue or dark blue version. When I checked the Secondary Guide, I noticed that mine seems darker than the light version, but lighter than the dark version. Is there anyway how you can recognize them? Is the dark version with a certain production mark? On the board someone mentioned that the light version, aurora has a white sash around her waist. Is that correct, cause i've never seen one with a white sash."

From information I've received, there have only been two versions - a darker (first release) and lighter (second and current version). Dancing Aurora and Prince Phillip made their debut in 1997 in what we refer to as the darker version. This version can be described as a very dark blue, almost purple in coloring -- think a bluish-purple. I personally was very disappointed, feeling the color is way off when you compare to the coloring of her dress in the film which is a much lighter blue. The photo in the Secondary Guide for the darker version is a few shades lighter than what the actual sculpt looks in person. In the photo marked 1st Version-Darker Blue, you can see the pink shading which gives it more of a purple vs. blue coloring.

I came across the lighter blue version 'window shopping' one day, seeing for the first time and stopped dead in my tracks! I immediately returned to work, contacted WDAC and was told a production change was made and the sculpture was being done in a lighter blue vs. the darker version as originally released. YES! They got it right!! The lighter version is much softer in coloring, definitely a light blue (sure to make Merryweather proud

The main photo for the Dancing Aurora and Prince Phillip in the Secondary Guide is an image of the lighter blue-2nd version but the photo depicts the blue actually darker than the actual sculpt. If you look at the photo further down on that page, 2nd/Current Version-Lighter Blue Version and/or the two close-up images, it is closer in coloring to the actual sculpture. A much lighter blue than the original, closer in coloring to her dress in the film and similar in coloring to the 2002 Gold Circle Exclusive ("Love's First Kiss").

There are in fact only two versions -- the original darker version and the second/current lighter version. Both are done in an opalescent paint and the trim on the collar and bodice are slightly lighter in coloring than the overall gown on both versions. As with anything hand-painted, there are going to be color variations. I know this for fact when I had to replace my pink version. I saw trim and bodice's both lighter and darker in coloring than mine and have seen the same with the blue version. It's possible on some that the trim was painted in a lighter tone that could appear white vs. a light blue. I've seen something similar on both the blue and pink versions.

As far as Production Marks, the only markings that have been reported to me by collectors has been the markings from 1997-2001. Can't recall which year I saw the lighter blue version for the first time. To start, if you have the 2002 Gold Circle Exclusive, try comparing your Dancing Aurora to the Sleeping Aurora.

Hope this helps and if any other questions, please don't hesitate to ask.

Mine is the same coloring as in the Gold Circle piece. So I guess I got the second version. I'd like to find the darker version just to see. I think it would make an awesome display with two blue colors and the pink version.

I'd suggest displaying them in this order: light blue, dark blue and then pink. It could make for an interesting display and create a sense of movement (displaying each sculpture at a different angle) like in the film.

The use of one or two risers would probably better help give this effect.

I've got the light version, and allthough i love the idea of displaying the 3 versions, i'm not going to hunt down a piece i actually allready have. Just to little room.
Thanks for this clarification. It was most helpful.
What i like about this piece is that if you turn it a little, it seems a different piece. When i put my pink and my blue next to each other, and aurora on the left with blue and on the right with pink, it doesn't seem to be the same sculpture. So you realy get a sense of moving if you put them together.

Koen, glad the clarification was able to help you determine which blue version you had.

When I had both the pink and blue (lighter) versions, I had displayed side by side (each at a different angle and one on a riser) and agree, when doing this, you really capture that sense of movement.