My previous blog entry looked back at Cinderella's Dress Mannequin and Dress.  Keeping with a Cinderella theme, this entry looks back at the Mice in Basket and the Tiny Tailors.

Mice in Basket ("Surprise!"), sculpted by Chris Peterson was an Open Edition release, released in February, 2005 (retired August, 2007) as part of a scene consisting of Cinderella, Lucifer and the Dress Mannequin.

Gus & Jaq ("Tiny Tailors"), sculpted by Jacqueline Perreault Gonzales was an Open Edition release, released in February, 2006 (retired December, 2012) as an add-on to the Cinderella Scene released the year before.  Something I liked that the WDCC did, was to periodically add new releases to add and/or compliment an existing scene.

The basket was made of resin, the mice bronze (in both releases) and the measuring tape pewter.  Mary is a huge fan of miniatures and not really sure why we didn't pick up both these pieces at the time of their release.

Gus & Jaq were very easy to find but was giving up hope on the Mice in Basket.  A special thanks to Kenneth at Enchanted Gardens Florist & Gifts for locating one for us.  It was the first time that we saw this piece in person (Mice in Basket) and was simply blown away by the detail of it, from each of the mice faces (love the sleepy-eyed look of the mouse standing on the scissors), to the contents of the sewing basket and how the sewing tape is draped around the one mouse's neck.  It really makes you appreciate the artistry of miniatures and the level of detail that the Walt Disney Classics Collection put into these. 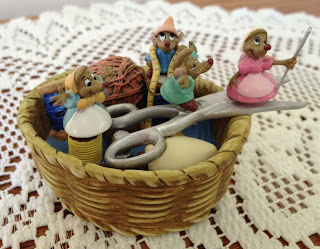 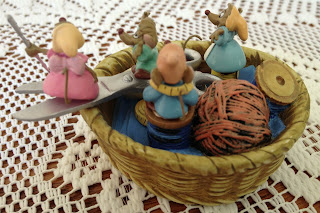 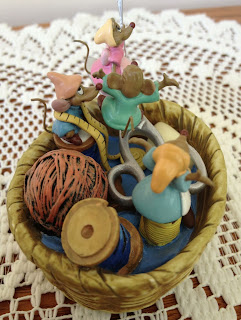 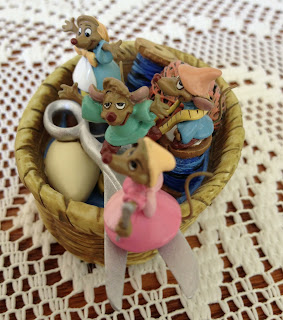 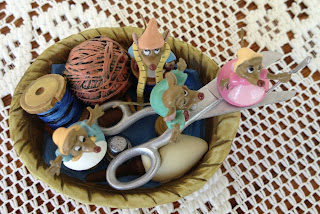 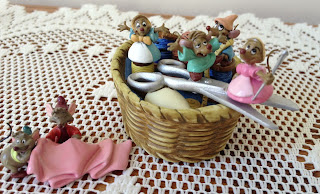