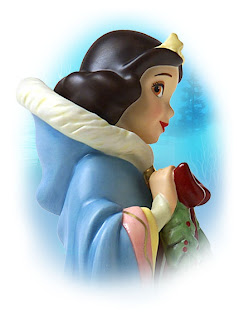 Two weeks from today is Christmas Day! Where has the time gone since Thanksgiving? These past few weeks has been a combination of decorating, shopping, preparing for the season and getting ready for year-end at work.

In these next two weeks, we'll revisit past Christmas-themed releases from the Walt Disney Classics Collection, starting with the Holiday Princess Series.

The Holiday Princess Series made it's debut in July, 2003 with the release of Belle ("The Gift of Love"), an Open Edition release, sculpted by Dusty Horner. This magical holiday sculpture was inspired by "Beauty and the Beast: The Enchanted Christmas" and the first in the Princess Series emphasizing on our favorite Princesses at Holiday. Releases primarily would be 'interpretative' as opposed to 'true to the moment.'

The second release in 2004 (July) was Aurora ("The Gift of Beauty") an Open Edition release, sculpted by Kent Melton. The colors for Aurora's gown were inspired by a 1957 Golden Book of Sleeping Beauty. During a signing event in 2004, Kent said this was one of his favorite sculptures that he sculpted.

In 2005 (July), Snow White ("The Gift of Friendship") was the third release in the series, an Open Edition release sculpted by Dusty Horner. The coloration for the Holiday Princess Snow White is inspired by one of the color variations from the first Snow White film poster. The border treatment on Snow White's cloak is inspired by the pattern on clothing worn by Snow White's mother in an early Little Golden Book.

The fourth (and final) release in the series was Cinderella ("The Gift of Kindness"), an Open Edition release sculpted by Margi Wray, released in 2006 (July).

The Holiday Princess Series was retired in December, 2006. Not a favorite of the hardcore Walt Disney Classics Collection collectors, it did very well in the theme parks and many were surprised the series ended in 2006 before the series included Ariel and Jasmine.
Posted by DC Pop Fanatic at 9:00 PM

The Holiday Series' are some of my favorite in the entire collection. I was really disappointed this year when they didn't introduce a new holiday series.

not a fan of these and I will comment no more...

Behr, I believe this is one of the first years, that there isn't a holiday release of some sort, be it stand alone or part of an ongoing series.

Many had hoped they would have continued with the full-size sculptures from Mickey's Christmas Carol. So much potential there. JTDO.

Any other Christmas-Themed releases others would like to see done?

LOL JL! Not a fan either, that is why I touched on first :)

I liked the idea and my favorite is Belle. My daughter I'm sure will just love them. Too bad they didn't continue and finish off the princesses. Maybe Jasmine and Ariel would be too "commercial" for the line since they were never really depicted that way. At least Aurora, Snow White, and Cinderella had some basis to be included as well as Belle.

That brings up a good series to have: Beauty and the Beast: The Enchanted Christmas. There are so many neat characters that could be included.