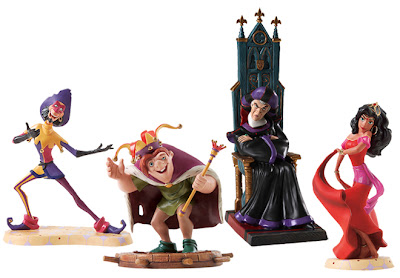 A much requested scene by collectors was the Festival of Fools Scene and this past year collectors were treated to the release of Esmerelda (4th release in the Leading Ladies Series) and Clopin & Quasimodo (both Open Edition releases). Every scene needs a villain and in 2008, Judge Claude Frollo makes his WDCC debut as a Numbered Limited Edition (NLE) of 750 sculpted by Patrick Romandy-Simmons. Additional angles to follow.

Judge Claude Frollo is a fictional character, the main villain from Disney's The Hunchback of Notre Dame, as adapted from Claude Frollo in Victor Hugo's novel of the same name. His voice was provided by the late Tony Jay, who had been chosen for the role based on his brief appearance as Monsieur D'Arque in Beauty and the Beast.

Frollo is the minister of justice of Paris, France. He holds an intense hatred of the gypsy population, expressing a desire to terminate their entire race. In the film, Frollo murders Quasimodo's mother and reluctantly becomes his adoptive father, attempting to raise him to despise the gypsies. Frollo's life becomes complicated when he falls in love with Esmerelda, a gypsy dancer whom Frollo believes to be an evil witch.

This version of Frollo is considerably different from the character featured in Hugo's novel; in the film, Frollo is a violent, hateful man with little to no regard for humanity, while Hugo presented the character as a far more sympathetic, complicated man, although he still remained the novel's antagonist. Despite the character's simplification, his villainious qualities, which include racism, lust and religious bigotry, remained quite mature for a children's film.

Collectors have commented less scenes, more stand alones so am glad they went the route they did with Frollo and made him part of the Festival of Fools Scene vs. a stand alone/event style sculpture. "Malevolent Magistrate" captures Frollo perfectly as he appears in this sequence of the film as Quasimodo is crowned King of Fools during the Feast of Fools.

For your viewing pleasure, below is a clip (courtesy of YouTube.com) of the Festival of Fools sequence during the Topsy Turvy! song and dance number:

The Hunchback of Notre Dame ©Disney
Posted by DC Pop Fanatic at 12:40 PM

I think this piece captures Frollo in all his squirmy evilness.

Very pleased that WDCC is doing the Festival of Fools sequence from the film. Instead of giving us stand-alone sculptures, we've been treated to a scene and a great one at that!

So far have only purchased Quasimodo and Esmerelda (along with the Opening Title) and they look FANTASTIC together!

Very glad they chose to do Frollo from the scene vs. a stand alone that could be blended in. Frollo will be my next purchase and then finish up with Clopin.

Funny, they were giving us a scene all along without anyone knowing there was going to be a new scene.

Jeff, was told the piece looks better in person vs. the image received. Looking forward to additional angles.

I like how this scene is slowly building. Each sculpture is very well done and look great when displayed together. JTDO.