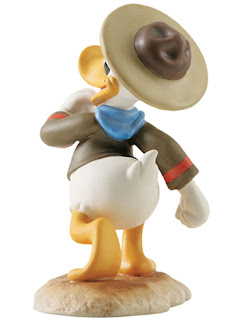 As we all think of what our New Years Resolutions will be (how many really are able to keep them???), it's also a good time to look back on this past year.

Was talking with friends yesterday about this and we came up with the idea of a R-ear End Review. This all came about talking about Donald's tush (don't ask .. LOL!). Let's all look back and list our Fab Five ( favorite releases) of the 2007 Line-Up and share our thoughts on this past year. So let's begin ...

1. Ugly Duckling & Mother - Hands down my favorite release of 2006! This sculpt still brings a smile each time I look at it. LOVE this series overall and based on the releases that followed in 2007, can't wait to see what's in store for 2008!

2. Quasimodo - I never thought we'd see another release from The Hunchback of Notre Dame after the Tribute Series release in 1997. The sculpture truly captures that moment in the film for when Quasi for once didn't feel like such an outcast.

3. Peter and the Mermaids - HUGE fan of this film and the Mermaid Lagoon Sequence is one I always wanted to see done and couldn't be happier with the outcome. More interesting was hearing Dusty Horner speak about this piece this past summer and how he wanted a singular sculpt and each character placed exactly as they should be positioned. With the upcoming addition of Wendy, it just gets better! Truly hoping they release the remaining Mermaids. This is one of my wishes for 2008!

4. Esmerelda - My one and only Leading Ladies release. The coloring, sense of movement and just downright sexiness captured in this sculpture is amazing. Her grouped with Quasimodo is one of my favorite groupings!

5. Ludwig Von Drake - LOVE the more esoteric/secondary characters and Ludwig doesn't fail to deliver. Not sure a stand-alone of Mr. Von Drake would have made my Fab Five if not for the addition of the globe as part of the sculpture.

Honorable Mention - Who doesn't try to do a Top 5 and find you always have to sneak one or two more in :) For me, Honorable Mention goes to Mulan. I'm not a big fan of this film, so that in itself says a lot. What I liked about this sculpt was how she had such a delicate look to her. The detail done in how her face is painted how the make-up runs perfectly along her jaw and you can see her actual skin coloring on her neck against the make-up. Hope to see this sculpture expanded into a larger scene in 2008!

Definitely a fun way to count down the end of 2007 Don!

Here are my top 5 in reverse order:

#4 - Hook, Smee & Tiger Lily - Really like the way Tim Bruckner captured the defiance of Hook and Tiger Lily and Smee caught in the middle. Great expressions on all the characters faces.

#3 - Donald Duck from Mickey & the Beanstalk - by far, one of the best Donald's done. Great face, great pose, and great rear end view!

#2 - Quasimodo - Actually I'd like to put all three Hunchback pieces in as my #2 pick. I love the Hunchback of Notre Dame movie and would love to see many more WDCC pieces done!! Quasi is PERFECT! Tony Cipriano captured all his nuances down to the hairy muscular arms. Really really glad we finally got more Hunchback in the line!

#1 - Being the huge Beauty & the Beast fan that I am, of couse, my #1 pick is "The Curse is Broken" Signature Series. Was fortunate to see Dusty Horner at the Gallery of the Lakes this summer talk about how he sculpted the various pieces and the little personal touches he included into the scene. Truly a beautiful and fun scene!

And of course, I have an honorable mention (or 2). Little Hiawatha is just too darn cute and the Pirate on the Archway Bridge brings back great park memories (just love looking up at the hairy leg in the ride).

Top 5 in no particular order:

Hades--Gotta give him a vote since he is one of my favorite villians and there aren't enough Herc pieces.

Wizards Duel--Finally a Sword in the Stone piece with Merlin!!!!

Pirate on Cannon--Just received my piece recently and it is beautiful. I love the entire Pirates series

Snow White and Dopey--Overall, a wonderful piece that captures the moment.

#1 - The Singing Harp from Mickey's Beanstalk. Not only is she a graceful and beautiful piece, but she was a Christmas gift from a wonderful group of friends. She's as special as they are!

#2 - The Auctioneer and Redhead. Fond Disney memories come together not only in subject matter, but WDCC. Love this set!

#3 - Mary Poppins. How could you not love the movie, the character and Julie Andrews?!? Kent did a terrific job capturing the spirit of all three.

#4 - Werewolf from NBC. Yes, it's a twisted movie and the set's not for everyone (but that's the beauty of collecting!), but this piece has a lot of energy. And I needed something for the "lefthand side" of my display of this set!

#5 - Captains Jack and Barbosa. Wow, these pieces are huge! Some of my friends know about my struggle to display them in one of my curios, so I've set them aside until I have the energy to move around some sets and pieces in other curios so I can get these two out. Barbosa is spot on!

For some of the 2007 pieces I don't have but want (all of them!), I would have to say Mulan, Clopin, and absolutely I need that Jail Scene!

Thanks for another great year of collecting!

Well my top 5 choices are scenes because there is just no way I can only pick 5 pieces. They are in reverse order

5th Mulan Pieces. Glad to see additions to this movie.

4th Mickey's Beanstalk. It was a nice surprise to see these done!

3rd Nightmare Before Christmas, glad to see other pieces from the series done

2nd Beauty and the Beast, I just love all of the signature pieces and Dusty did a wonderful job on this scene

1st. The Pirates series. I have all of them and can't wait for the release of the Jail scene.

It's all the snow we had... kept me from getting out!

5. Mary Poppins, practically perfect in every way!
4. Singing Harp, she's just beautiful (and I haven't even seen her in person yet!)
3. I just can't decide between the three releases of the Silly Symphony series: Ugly Duckling, Old Mill, Little Hiawatha. I love them all equally!
2. The Pirates Ride series is just amazing. Wicked Wench Captain, Auctioneer and Wench, Pirate with Pigs, Pirate on the Archway Bridge, Jail Scene, although if I had to pick just one it would be the Pirate on the Archway Bridge.
1. Well, gosh... it's a pirates life for me! Shiver me timbers but Barbossa and Sparrow really did it for me! (I consider them a set, not individual pieces since they just complete each other perfectly.) The detail on them is amazing.

Thanks to all who have posted their Fab Five favorites from 2007 thus far.

Thought interesting how varied everyone's list was. Look forward to hearing from others.