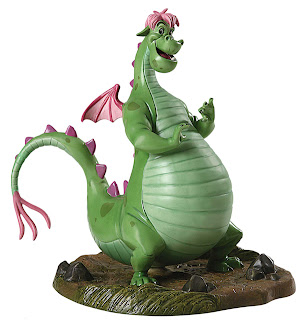 Today we received images of three (3) more non-member releases for 2008. Due to work and school obligations, will get each release uploaded to the blog once completed to discuss and then do our normal presentation to showcase the 1st Quarter in it's entirety.

Up first, from Pete's Dragon is Elliott! Pete's Dragon (first released on November 3, 1977) is a live-action/animated musical feature film from Walt Disney Productions. It is about a young orphan named Pete in a small fishing community in Maine in the early 20th century. His only friend is a dragon, Elliott, who also acts as his sentinel. Elliott can make himself invisible and is generally visible only to Pete, which occasionally lands Pete in trouble with the locals.

For those unfamiliar with Elliott and/or Pete's Dragon, I've included a short clip from the live-action/animated film (courtesy of YouTube.com) below:

Another sculpture that I will be picking up for 2008!

This is a wonderful piece! I particularly love Elliott's face and the nice base!

I will also be buying this one!

Darcy & Matthew, count me in too! Elliott is fantastic! My favorite of the non-member releases!

A definite must for me.

Love the coloring. As his expression is priceless.

Love both the coloring of Elliott and the detail in his base. Not only is his expression priceless but love how Ruben sculpted his hands.

Looking forward to this one very much!