Away To His Castle They Go! 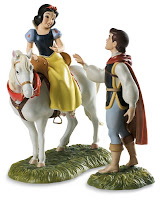 Snow White on Horse ("And Away to His Castle We'll Go...") and Prince ("Forever, I Know..."), sculpted by Kent Melton were an Open Edition Set released in July 2003. This romantic sculpture set, unveiled during a Dealer Forum held at Walt Disney World® in May, 2003, exquisitely captures every joyful detail of that unforgettable moment from Walt Disney's first animated feature when the fairest one of all and her Prince start off for the happiest of all "happily ever afters."

Walt Disney Art Classics also introduced a Whiteware Numbered Limited Edition (NLE) of the Snow White and the Prince Set in an edition size of 175, available only to those dealers who attended the forum.

Snow White and Prince Set was also the inspiration for the 'Dreams Come True' Series.

Wow that was a doozy. Never saw that one coming. Thought for sure that one of the NBC pieces would go. The month is young though.

OH NO!!!! This one is one of those that I did not want to retire. I still need to pick up this piece. Now I have to work double-time to get it! I really thought it would have been one that was Halloween related. This really knocked me for a loop!

This did throw me as it did Jeff. I wish I could have been there when they unveiled this, but we just got back from the cruise and had to fly out.

I'm very happy I picked up this set, because it is a nice one. Now they are "happily ever after."

I think we were all in an October/Halloween mode of thinking making this retirement catch us all totally off guard!

It's truly a beautiful set. Hopefully Darcy you'll get yours soon.

Tim, I didn't make the convention that year but did make it down for Public Day. Troy from Enesco was kind enough to show Michelle, Virginia and I after it was unveiled at the Dealer Forum. I understand when the piece was unveiled, Snow White rode in on a Horse with the Prince. That had to be something to see!

As Jeff said, "the month is young" and given the number of retirements this year, wouldn't surprise me to see another retirement before the month is out. Maybe we'll get that Halloween Retirement after all :)

Wow! What a beautiful looking set! Thanks for the up to the minute news Don!

Well, consider me another one thrown for a loop with this announcement. Didn't see this one coming at all, especially with the "Whistle While You Work" scene already getting the retirement hammer this year. And, of course, it has to be another one that I have yet to still pick up for myself. At least, it wasn't announced as a "dry" retirement, so hopefully I've got some time yet to grab one without having to rush too much.

Ahhh well, now we know the secret formula behind the retirements!!!
Enesco knows which pieces you have (you must faithfully send in those registration cards which are in the COAs) and they are retiring all pieces that they know you have not bought yet!!!
yup yup yup, that's their formula, I know it!

You must add this sculpt to your collection if you haven't yet as it is a fine example of the Prince and Snow White and I also feel an important scene from the film.

You're welcome Cheryl! As Tony mentioned, it's a great set! I finally got around to getting mine last year.

Snow White and Prince look amazing with the Enchanted Places Wishing Well displayed behind them (given the Wishing Well is where they first met).

Don, I have them displayed with the Snow Whites Castle hanging on a WDCC wire stand, trying to recreate the end scene of the film as they go towards the castle. This seems to work to.
Tony

That sounds like a great set up as well Tony. I would still like to see them do Snow White's Castle in full size some day.