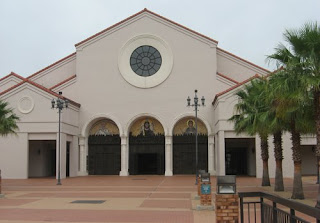 The last few days of the trip flew by SO fast! We arrived safely home last night. Below is a recap of those last few days we had at WDW before we had to say good-bye :(

We started our day attending mass at Mary, Queen of the Universe Shrine. Mary, Queen of the Universe National Shrine is located in Orlando, FL at 8300 Vineland Avenue. It was built to service the large number of Catholic tourists who visit the attractions in the Greater Orlando area. After the grand opening of Disney World in Lake Buena Vista, FL, the Diocese of Orlando determined that the thousands of Catholics visiting from around the world needed a place for Mass. The Diocese arranged for Masses at several area hotels to handle the unique "tourist ministry", originally named Orlando's Holy Family Parish. Bishop Thomas Grady named Father F. Joseph Harte to be the first pastor.

With projections predicting over 30 million annual visitors to Greater Orlando in the 1970s, Fr. Harte and Bishop Grady worked to establish a permanent location. In 1979, work was completed on the new facility, named under the patronage of the Virgin Mary. While it is a 2,000 seat church and parish of the Roman Catholic Diocese of Orlando and provides mass for the faithful, it has also become a regional tourist attraction.
The Shrine consists of the main church, the Rosary Garden, the Mother & Child Outdoor Chapel, the Blessed Sacrament Chapel, the Shrine Museum, and a gift shop. 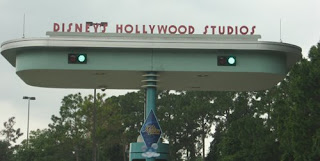 After mass, we returned to our resort to meet Terry (BK) for a day at Disney's Hollywood Studio™. We spent a few hours here on Monday to check out Toy Story Mania but this was our first fully day in this park. We checked to see if Toy Story Mania was still in previews and fortunate for us it was but sadly was having technical difficulties. The castmember told us to keep checking back. Immediately got on the Batphone to let George and Michelle know, as they were hoping to check it out before heading home. 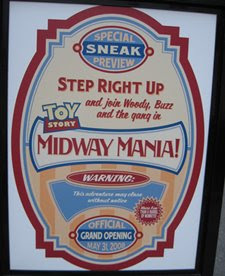 We headed to lunch at Sci-Fi (I'm sure you've realized by now, eating is as just as much part of the experience of being at WDW for us as visiting the parks. Some serious dieting now that we're home .. LOL!). Had a great lunch as always and a great opportunity to ham it up in the cars while waiting for lunch to arrive. By early afternoon, Toy Story Mania was back up and running and was able to ride five (5) more times before the end of the day. This was Terry's first opportunity to check it out and Michelle and George made it over and were able to ride as well. We all agree, this ride ROCKS! The official Grand Opening has been announced .. May 31, 2008!

In addition to the usual rides, this was our first time seeing the Lights, Motors, Action! Extreme Stunt Show which is located in the New York Street backlot area. It is patterned after a show that is currently running at Disneyland Paris™. Herbie, the loveable car star from several Disney films, also makes a special cameo appearance. Enjoyed the show very much and glad we were finally able to see it.

After Lights, Motors, Action! we walked around the New York Street area checking out the Cars merchandise :) and I spotted a Radiator Springs sketch near Honey, I Shrunk the Kids! and asked a castmember what that was for. She said that Mater and Lightning McQueen will appear in that area. I was there!! As those who know me and those with me on this trip, am a HUGE Cars fan and had seen Mater last year so was pretty stoked in getting to see him again (more photo ops) along with Lightning McQueen. 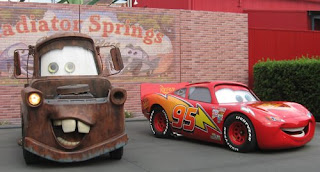 We closed the evening at Disney Hollywood Studios™ seeing Fantasmic. We did the dinner package, choosing Mama Melrose since Mary & Amanda had never eaten there. We normally do the Brown Derby Fantasmic package. I was a bit reluctant, since I had eaten there last year and had a terrible experience in both the food and service. Happy to report, as with the rest of the trip, had a wonderful meal and great server. What a difference a server can make. For those who never ate at Mama Melrose, be prepared, they give you entirely too much food! We were unable to eat everything and I'm one who can normally lick my platter clean .. LOL!

After Fantasmic, we headed over the Magic Kingdom™ to meet up with George and Michelle and take advantage of extra magic hours. I really enjoy extra magic hours, the park isn't nearly as crowded and as the evening progresses, begins to thin out. We were able to get in a lot of rides we hadn't had the chance to ride yet. We planned on returning to the Magic Kingdom™ on Monday, so still needed for Amanda and I to have our annual ride on Dumbo plus get my Dole Pineapple Whip :) 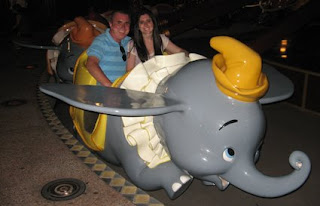 Breakfast at the Whispering Canyon was a hoot as always. Our server was Wendy who we've seen there before on past visits. After breakfast, Michelle and George headed over to Epcot™ and we returned to the Magic Kingdom™. The weather began to get humid starting on Friday and seemed to increase over each passing day. We rode a few of our favorites, did a little shopping and decided to return to the resort to rest a bit before dinner that night.

My friend Mindy from work and her husband Chris arrived at WDW on Sunday and were spending a few days in the parks before taking a cruise, so we planned on meeting them for dinner at the Kona Cafe at the Polynesian Resort. The Kona Cafe has become a favorite of ours since we first dined there in 2006. My personal favorite items on the menu is starting with the Lump Crab Cakes (with Asian tartar and pineapple relish) and for my entree, the Coconut Crusted Chicken. As I mentioned, we've become quite fond of this resort. After a great dinner, they headed to Downtown Disney™, we returned to the Magic Kingdom™ and planned to meet back up at Old Key West later, since they were staying there as well.

We got to Magic Kingdom™ just as Spectromagic was starting. Amanda and I focused on getting over to Fantasyland and riding Dumbo. We have a picture of Amanda and I in the Dumbo car every trip since her first visit there, so was determined to not miss out this trip. Mission accomplished (Amanda chose yellow this time), we headed off to Adventureland so I could get my Pineapple Whip. As we watched Wishes for the last time (a personal favorite of Mary's), I enjoyed my pineapple whip to the last drop :) We met up with George and Michelle after Wishes at Casey's and hung out a bit before each heading to our resorts. We got back to Old Key West, got the limoncello from the freezer with some glasses and headed to the pool area to meet Mindy and Chris. It was too bad our trips didn't overlap more days. Was a great way to end our last full day before heading home :) 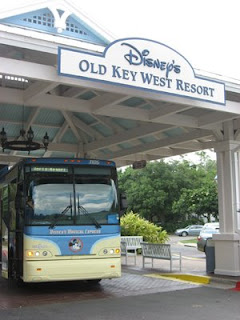 We had done the majority of packing on Monday before dinner, so finished up the last of our packing, shut down the computer and had our luggage moved to the holding area until we boarded Magical Express at 4:50pm to head to the airport. As with each trip, we had our last breakfast at Olivia's, located at the Old Key West resort. Whenever at WDW and you can fit in your schedule, check out Olivia's. Great food and the servers are all so nice and friendly. After breakfast, mailed that last postcard, we headed to Downtown Disney™ to meet George and Michelle and do some last minute shopping.

We spent a great deal of time in the Art of Disney looking at 2D. George may have convinced me I need the Donald Duck 2D from Donald's Better Self. The one thing we noticed checking out WDCC throughout the week and specifically our last 2 days, product was moving. The shelves weren't as full by the end of the trip as when we first arrived.

After our final shopping was done, we had a final lunch together at the Earl of Sandwich, then walked over to Pleasure Island. We bid good-by at the bridge, Michelle & George went to board their bus back to The Wilderness Lodge and we took the boat back to Old Key West.

What an awesome trip this was. We had the most awesome weather (in spite of the humidity the last few days), being there for 10 days we had no pressure to pack it in at the parks so was very relaxing, tried a lot of new restaurants (thanks Jimi and Michelle for the recommendations) and made some awesome memories with great friends! To Anthony and the Staff at Old Key West, you were amazing!

We got to say good-bye to George and Michelle once again, as we connected again at the airport after check-in. Fortunately for us, our flight was on time and their flight was delayed not once but twice :( I did get a text from Michelle when we landed that they were able to depart earlier than the last schedule change.

We already have our next trip plans underway. Can't wait to return! I hope everyone enjoyed the blog entries. Our family and friends enjoyed keeping up with what we're doing and hoping it also helped those planning future trips in regards to the parks and dining experience. Off today, time to unpack and get ready to return to work tomorrow :(
Posted by DC Pop Fanatic at 11:59 PM

Well Mr. Duckman...you all seemed to have one great vacation. My waistline expanded just reading about all the wonderful meals you had. Glad you were able to hook up with Michelle and George so many times as well as seeing Terry BK and Janeene.
We know the real reason for taking off today, getting that lawn cut. Don't lie.
Awesome blog of great hectic yet relaxing trip. Can't wait to get down there myself. Don't want to rush the summer for everyone so I'll be patient.

Thanks for the wonderful trip report. Glad to hear you are safely back home!

Jeff-It was both an amazing and memorable vacation. Was great experiencing new rides, restaurants and spending time with great friends.

Matthew-You're welcome. We weren't ready for all the rain and colder temps we came home too. We were getting too accustomed to the weather temps :)