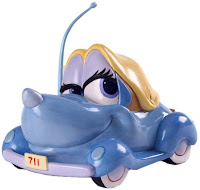 As many of you know, one of my favorite animated shorts is Susie, the Little Blue Coupe which was the subject of a blog entry back in July discussing both the short and it's inspiration for Disney/Pixar's 2006 animated feature, Cars. I recently uncovered more information on author, Bill Peet and Susie's inspiration for Cars, warranting a second entry :)

As previously posted, among the biggest design inspirations for Lasseter and his team was the classic 1952 Disney short, Susie the Little Blue Coupe. One of the key animators on that film was the legendary Ollie Johnston, who at age 92 is the last surviving member of Walt Disney’s original team affectionately known as the nine old men. Lasseter maintains a special relationship (in addition to a love of trains) with Johnston, and he had numerous occasions to discuss the "Cars" approach with his friend and mentor. The film's method of anthropomorphizing the cars, using the windshield for the eyes and eyelids, served as the stylistic inspiration for this film.

Given it being the inspiration for Cars (and many references to support this), it's surprising that Susie wasn't included in the DVD release last year as an added bonus :(

Susie, the Little Blue Coupe is a very agreeable little film, with plenty of good humor & fine animation and once again illustrates Disney's adeptness at giving sympathetic life to an inanimate object. Susie's story was written by Disney animator Bill Peet and is very similar to those he would later author as a celebrated children's author. As always, Sterling Holloway makes the perfect narrator.


If you are a fan of the children's books by Bill Peet, you will love this story. Before Peet was a published author, he was one of the top story men at Disney. Not only did he work on classic features like Dumbo, Sleeping Beauty, Peter Pan and Lady and the Tramp, he also wrote a number of short films like Susie. These include: Goliath II (the story of a 6 inch tall elephant) and Lambert the Sheepish Lion. His storytelling sensibilities are unmistakable in these films and bear his mark like a signature. Peet left Disney around 1965 to write children's books. He died in 2002. Learn more about Bill Peet, Walt Disney's greatest storyman for 27 years at his official website.


Trivia: In Susie, the Little Blue Coupe, a truck in traffic labeled "Peet's Ice," is a reference to writer Bill Peet.


As an added treat (and fast becoming a blog favorite), Susie, the Little Blue Coupe (courtesy of YouTube.com):

Susie, the Little Blue Coupe is ©Disney
To date, the Walt Disney Classics Collection hasn't released anything from Disney/Pixar's Cars. I've set up a Cars Poll to gauge collectors interest in seeing something done from this film.


Given the recent tampering of our Mr. Ray Poll, in order to participate in this poll and/or future polls, you need to contact me via email at wdccduckman@aol.com with your name, board log-in and email address to be granted access to the Survey Folder at the Duckburg Internet Cafe. Apologize for the inconvenience. Let the voting begin!
Posted by DC Pop Fanatic at 6:00 AM

Thanks for the background info on Bill Peet and for the short. I had never seen it and was not sure why it was such a favorite of yours. But now I can see why you like it so much. It is very charming. The background info and seeing the short makes my WDCC Susie more special. Thanks.

Hi JL -- isn't it quite the gem? I'm glad you enjoyed the short. My goal is to make more and more people aware of Susie .. LOL!

It is also a favorite of John Lasseter. I found the following quote in my research, "One of my favorite Disney cartoons is 'Susie, the Little Blue Coupe,'".

I was disappointed in all my findings in how Susie was an inspiration for Cars, that her short wasn't included as a bonus feature on the DVD :(

Last fall I insulated and drywalled my garage and have gone with a Cars theme and bought a 2nd Susie to display with the various items I've been finding (including my die-cast collection).

Many thanks to Bill Peet for creating this endearing character!

Hi Don, it was the first time i saw this short. Great little movie. It's always fun to see a blogposting with the movie to go with it. Thanks Don and Youtube

Susie is such a cute piece! She has such personality!

I can definitely see her influence in "Cars"!

I think maybe someone else could confirm this, but I had read somewhere that Pixar is planning a sequel for 2012 to coincide with the opening of the "Cars" ride at Disney's California Adventure.

Hi Koen - my goal is to make everyone aware of Susie :)

It is a great short and glad you enjoyed it. It's been a lot of fun where I can incorporate the film/short into the blog posting.

Hey Matthew, my goal is for every WDCC collector to have Susie in their collection .. LOL!

You are correct! A sequel is planned to coincide with the opening of CarsLand at Disney's California Adventure®. Can't Wait!!

With the CarsLand, the sequel and the success of the merchandise, it is inevitable that WDCC will make Cars. When they do, I want the characters to be interacting with an accessory so that they look "animated"

Hey JL, what about a flat resin backdrop (similar to the Small World Accessory items) of their shop/business in Radiator Springs?

When all displayed together, you've actually recreated Radiator Springs?