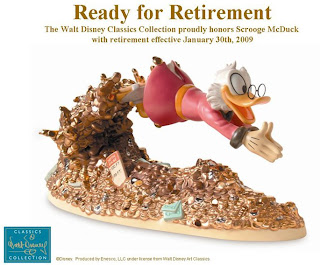 The first retirement for 2009 is Scrooge McDuck ("A Pool of Riches"). This sculpture (richly plussed with (brass, acrylic, gold metallic paint and pewter) captures Uncle Scrooge as he dives around his money like a porpoise - just as he does in the classic comic book stories by Disney artist Carl Barks. 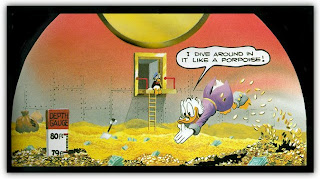 An Open Edition release (June, 2004) sculpted by Bruce Lau, included a lithograph of the Carl Barks comic art from the classic "Only a Poor Old Man" from the first issue of Uncle Scrooge comic released in 1952 (pictured at right).

It was the first story with Scrooge McDuck as its main character (he had already made his debut as a supporting character in "Christmas on Bear Mountain"). The story was published in 1952 and is one of the most reprinted Uncle Scrooge comics.
Special Update (02-04-09): Scrooge McDuck ("A Pool of Riches") is now sold out at the Enesco warehouse. Please check with your authorized dealer for availability.
Posted by DC Pop Fanatic at 10:30 AM

Well, at least I don't have to go hunting down this new retirement (lol) since I already own it. Just finished tracking down the Mummy Boy after his sudden retirement last year.

Wonder if this means we'll see Scrooge appear again sooner rather than later in the new Mickey's Christmas Carol series? Or perhaps he'll make an appearance in the 2nd release of the Classic Comics series that began last year with "Donald Duck Finds Pirate Gold?" Either way, I'd be happy to see a new Scrooge McDuck find his way into the WDCC.

It's always nice when something retires and you already have in your collection .. LOL! Since I had the first Scrooge release, "Money! Money! Money!" from Scrooge McDuck and Money (1967) I passed on this one, though I actually prefer the one retired today.

I too wonder with him being part of the Open Edition release from Mickey's Christmas Carol and the possibility we could see more of him from this short, not to mention the Classic Comics Series, it made good sense to retire this version of Scrooge?

Wow. I think I just became a new reader for this blog.

Did Disney ever release a statue for their movie "Tarzan"? Just curious, I'm not a collector myself.

Multiple sculpts have been released for "Tarzan". If you look down the right side of the blog to "The Duckman's Inside Report Directory", you will see a link for the "Secondary Price Guide & Image Gallery". If you click on that link, it will take you to a page listing the many films and animated shorts that have had sculpts released so far. Scroll down the page till you find "Tarzan" and click on it to see the sculpts that have been released to this date.

So far, I only own the Tarzan vs Sabor sculpture set. As this year marks "Tarzan"'s 10th anniversary, perhaps will see some new pieces as well.

Welcome to the blog! As Jason mentioned (Thanks Jason!), the Walt Disney Classics Collection has done two (2) releases from Tarzan since the release of the film.

In 1999, there was a scene release that included an Opening Title, Tarzan, Jane and Terk. All but the Opening Title were Limited to Production Year 1999.

Of the two Tarzan releases, the original Tarzan is my favorite vs. the version done in 2006. Kent Melton did an amazing job in the way he sculpted Tarzan.

So you prefer the original to "Tarzan II"? Agreed.

I'd also be surprised about hearing much more about this film. It just sort of came and went.

I'll take a look, thanks Jason and Duckman.

Special Update (02-04-09): Scrooge McDuck ("A Pool of Riches") is now sold out at the Enesco warehouse. Please check with your authorized dealer for availability.

I saw this listed at SideshowCollectibles.com yesterday for those who may still be looking for it. Good luck!