There is a special online auction which has just opened benefitting the GHTA (Gift and Home Trade Association). Enesco has donated a trio of Walt Disney Classics Collection sculptures (in one auction lot) depicting Walt Disney.

Two of these sculptures are rare Artist Proofs and the third is one of the Disney Archives/D23 pieces, all will be signed by Disney Master Artist Dave Pacheco. The bidding will close on June 17th at 10:00 PM C.D.T.


The Walt Disney Company launched WDCC in 1992 to bring our favorite Disney characters and emotions to three-dimensional life in a collection of fine art sculptures applying the same principles and techniques used in classic Disney animation – artistry, storytelling and creativity.

In honor of Walt Disney’s 100th Birthday the Walt Disney Classics Collection proudly introduced this unique sculpture in 2001 saluting both the man and the Mouse who started it all.

Based on a classic 1950’s photo in which Walt fondly posed with an antique Mickey doll – one of the earliest and most popular pieces of memorabilia – the sculpture captures the essence of the man whose imagination enchanted the world and whose spunky little character made it smile.

This beautifully-sculpted porcelain tribute features chair legs of bronze and pewter and chair rails of brass, while Mickey’s tail is made of wire. The back of the chair reads “Walt Disney Studios,” and the sculpture features a special backstamp commemorating Walt Disney’s 100th birthday. This item is an Artist Proof Version, hand numbered 25/25 on the Certificate of Authenticity and the sculpture backstamp indicating it is Number 25 of 25 and is signed by Disney Master Artist David Pacheco.

Artist Proofs are not intended for commerce and are created for the sculptors, painters, and animators involved in the project as well as for archival purposes. The regular edition version was Production Year Limited to 2001 and exclusively available to Walt Disney Collectors Society Members. 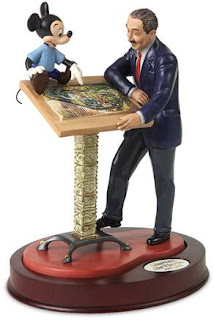 Created by the Walt Disney Classics Collection to honor Disneyland® Park’s Golden Anniversary in 2005, this exquisite sculpture depicts Walt Disney proudly explaining his plans for Disneyland® to Mickey Mouse. Look closely and you’ll see the 1954 rendering of Disneyland® painted by Peter Ellenshaw recreated on the podium.

This commemorative piece features a 50th Anniversary Logo on the backstamp of the sculpture and it is plussed with pewter desk legs, brass wire tail for Mickey, and a porcelain inset plaque on a custom hard wood base. The sculpture is an Artist Proof Version, hand-numbered 4/5 on the Certificate of Authenticity and the sculpture backstamp indicating it is Number 4 of 5 and is signed by Disney Master Artist David Pacheco.

Artist Proofs are not intended for commerce and are created for the sculptors, painters, and animators involved in the project as well as for archival purposes. The regular edition version was a Numbered Limited Edition 1,955 and it sold out in 2005. 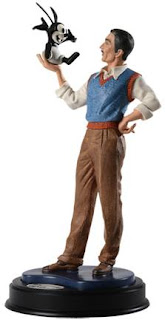 Before the Mouse there was the Rabbit – Oswald the Lucky Rabbit, that is. Walt Disney’s first cartoon star, Oswald, paved the way for a certain mouse named Mickey with animated antics that had 1920s movie audiences in stitches.

Plussed with pewter ears on Oswald, this historic sculpture, introduced in 2009 by the Walt Disney Classics Collection, portrays the young filmmaker with his happy-go-lucky hare, who embodies the sassy style of early animation. Presented on a custom hardwood base with porcelain inset plaque, this sculpture is part of the 400 pieces within the sold out General Limited Edition of 1,500 that features a Walt Disney Archives Collection /D23 Backstamp and is signed by Disney Master Artist David Pacheco.

Winning bidder can make payment in form of credit card or check submitted directly to GHTA. Certificates or items will then be mailed to winning bidders at the close of Auction once payment has been received.

Donated By: Enesco
Posted by DC Pop Fanatic at 12:00 PM