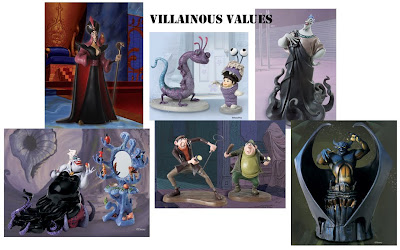 In a season of mischief and mayhem, Walt Disney Classics Collection is celebrating some of the most notorious Disney Villains (and one sweet little girl, Boo, who's dressed as a Monster!) in a promotion rolling out just in time for Halloween that they're calling "Villainous Values".
Each of the in-stock sculptures have been selected for this promotion as a last chance opportunity. They are all either Closed Editions or they will be Retired when they are Sold Out. No additional pieces will be produced and quantities are extremely limited.
This special promotion begins today and includes the following Members Only releases:
Jafar & Iago ("Villainous Vizier") - Limited to Production Year 2006 $99.00US
Randall ("Slithery Scarer") - 2005 Open Edition $75.00US
Boo ("Tiny Terror") - 2005 Open Edition $75.00US
Hades ("Name's Hades, Lord of the Dead") - 2007 Numbered Limited Edition $199.00US
Ursula at Vanity ("Devilish Diva") - 2007 Villains Series Sculpture $140.00US
Horace & Jasper ("Bumbling Baduns") - 2007 Commission Only Sculpture $160.00US
Chernabog ("Symphony of Evil") - 2006 Numbered Limited Edition $399.00US
Included are the two Walt Disney Collectors Society Villains (Ursula and Horace & Jasper) as well since they thematically tie-in. They are offered at the same Collector Appreciation Pricing announced previously.
Contact an Authorized Dealer for Availability!
Posted by DC Pop Fanatic at 2:45 PM

Hey there! We are Disney collector's and have been following your site for quite some time now. You are so informative about the WDCC! We also love the "Duckman Inside Report", keep up the fantastic work! We would love for you to check out our blog in the meantime, we just posted some of our WDCC Villians, which goes along with this post here. We really wish that we could order these sculptures off disneystore.com but unfortunately they do not ship outside of the continguous United States. We have been lucky to find some on the secondary market though!
Anyhow, we would greatly appreciate if someone like you would take a minute to check out our blog.. Feel free to give any advice. Thanks alot, take care.
www.disneypixarfanatics.blogspot.com