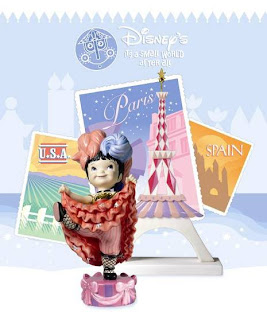 The Walt Disney Classics Collection has just announced the Series Retirement of Disney's it's a small world. All sculptures and ornaments have been retired, no new releases are planned and in-stock pieces are available while supplies last (many of these there is less than 100 units in inventory).

As a part of this MAJOR retirement, it is also announced Hawaii's ("Aloha") dry retirement!

For the first time, a special incentive program to retailers and collectors in conjunction with this surprise announcement where participating retailers will offer the pieces to collectors at "Celebration Pricing" in time for the holidays. Also included are the remaining inventory of Small World Spain and Belgium (previously retired in May, 2007) in the program. The only active piece not included in the revised pricing is Small World Peru (the final release in the series which just started shipping last month).

Please check with your authorized dealer for availability.
Posted by DC Pop Fanatic at 6:00 PM

NOOOOOOO!!!!!!!!!!!
I love this series !!!!!!
They still haven't done the ice skaters from Norway, the surfing boys from the So Pacific scene and the alligator and cheetah w the umbrella!!! (along with a few others)

so what are the details on the incentive

I know you (as well as many collectors) were huge fans of this series. I think the retirement took many by surprise.

I just finished putting together a page that lists all the items retired (figurines, ornaments and accessory items) with the Celebration Pricing, which can be accessed by either clicking on the image of the France sculpture or the link contained in the entry.

I love this series. This means I'll never get the leopard holding the umbrella. Love the Norwegian skaters too. So many more they could have done.
It would have been nice to do a "last year availability" and add a few more.

But maybe we'll see a return in a couple of years? Nothing is written in stone.

Anybody say why they were doing this? The Parks did not want dealers to originally have the line but WDCC found that opening distribution greatly increased sales. It has been a charming set, sorry to see it retire.

WOW - WOW - WOW. This took me by surprise. I figured we had another couple years to go for this series. I guess my JCL self will really have to kick it into high gear. I only have 2 pieces! And there are only about 15 more I want! LOL. The "50 percent off" pricing is also a huge surprise as well.

I have to say I am completely surprised by this. I think it is a great line and so reasonably priced. I love the accessories. I do have a few to get yet, hope they are still out there;-). Oh well, maybe they will do a them again in a few years.
Cindy

Can someone tell me if they know of any online dealers that are actually selling these pieces at "Celebration Pricing", and also shipping to Europe ?

I know Gallery of the Lakes does this. But i believe Standing House in Tongeren (Belgium) will do the same programme, and then you can pick them up.
Or you can buy Japan from me :-)
Regards
Koen

Well, in my excitement to get the rest of the pieces I needed, I bought one I already had. If anyone is looking for Thailand, let me know as I will have an extra one when my shipment arrives. This is one on the celebration price of $49.99, plus whatever shipping and insurance to you would be. Cindy

Jeff-As Koen said, you never know, the series and/or a release could always still happen in the future. Look at American Folk Heroes and the Members Only Numbered Limited Edition and Ornament, all took a hiatus and we eventually saw make another appearance in the line.

Pamela-Haven't heard why it was decided to end the series. It was a charming series.

Greg-I can see the celebration pricing getting more people to either jump into the series and/or pick up pieces they eventually wanted but didn't feel the rush/need to get up until now.

Koen-Thanks for helping Bart and Rick!

Bart and Rick-If GOTL isn't able to help you on a specific release, suggest checking with other US dealers that do ship overseas.

Cindy-I think the retiring of the series took more by surprise than not. Some of my favorite releases are Italy, Tahiti, Africa and Egypt.

WDW is not doing the Celebration pricing.... Although cast members get 50% off right now for the holiday discount....